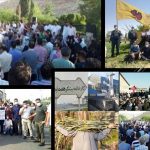 Written by Esmail Mohades on August 3, 2020. Posted in NEWS 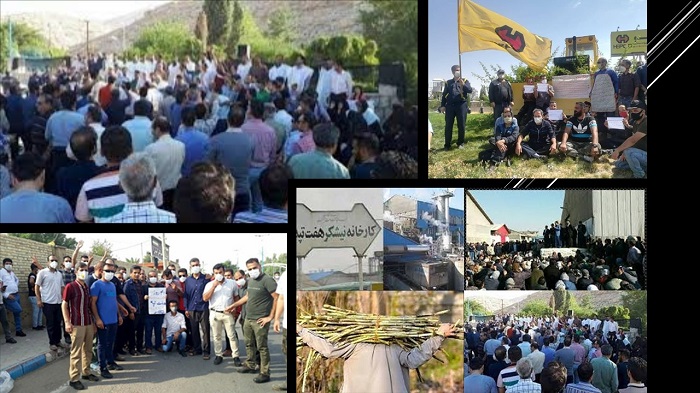 Delays in paying wages have led to employees of Iran’s oil, gas and petrochemical industry to take part in strikes in numerous cities throughout southern Iran on Saturday. They are also demanding pension entitlements.

Employees & workers of Iran's oil, gas & petrochemical industry launched strikes in numerous cities checkered across southern Iran, protesting paycheck delays & demanding the pensions that they have been denied for a long time now.#Iran#IranProtestshttps://t.co/EeOetMPChN

Dates and events that took place

There were also strikes in the refineries in the following provinces:

These workers have a number of reasons for protesting which include extreme working conditions, insufficient basic safety equipment and not receiving their paychecks and pensions for many months.

She supported wholeheartedly the workers protesting in Abadan, Qeshm, Parsian, Lamerd, Mahshahr, and South Pars. She highlighted that oppressed workers have the right to demand their wages and pensions which have been withheld for far too long.

She tweeted: “Hail to the workers of refineries in Abadan, Qeshm, Parsian, and Lamerd who have launched a strike to gain their rights. #Iran’s oppressed workers are using strikes and protest to restore Iranian workers’ rights plundered by the mullahs’ inhuman regime,”

Hail to the courageous workers of HEPCO who went on strike and the people of Arak who supported them.I urge international labor organizations to condemn the clerical regime’s repressive policies against Iranian workers and support the demands of HEPCO workers#Iran#Iranprotests

In other protests in Iran, the workers of the Haft Tappeh Sugarcane Company have continued with their strike and held a Sunday rally outside the local governor’s office. The workers want their delayed paychecks as well as the renewal of their medical insurance booklets which have expired. It has now been 49 days since the start of the Haft Tappeh Sugarcane Company strike. The protest is due to delayed paychecks.

In Arak, central Iran, employees of the HEPCO heavy machinery factory took part in a large gathering for the second day in a row on Sunday. They are seeking better job security and want the pay paid that they are owed.

Last  Saturday, Nourabad locals in Lorestan province, western Iran, gathered outside the mayor’s office with a banner which read, “We the residents of Baharestan, Taleghani, Koshtargah, Shahrake Basij and Kuye Soleimani districts demand standard streets for our town and neighborhoods.”

No one should have to strike because the condition of their streets is so bad but because there is so much corruption when handling money by the regime key projects never take place.

July 25 – Shush, southwest #Iran
Employees of the Haft Tappeh Sugarcane Company are protesting & on a strike for the 41st consecutive day, demanding delayed paychecks and answers to other outstanding issues raised with company officials.#IranProtests pic.twitter.com/tSFuYz1juH

The Mullahs regime has responded to the protests at Haft Tappeh with a suppressive force. Since 2018, a dozen of the arrested protesters have been tortured and forced to make false confessions on state television. The People’s Mojahedin Organization of Iran (PMOI / MEK Iran) previously reported that forced confessions are a common tactic employed by the regime.

Officials of the mullahs’ regime are now warning of even greater protests and uprisings on the horizon, especially because of the failure to properly deal with the Coronavirus outbreak in Iran which has already killed over 81,000 people. According to MEK.

The MEK is not just an alternative to the mullah’s regime in waiting. It represents a very real threat to the regime and the potential for the mullahs’ regime to be overthrown and replaced with a free, secular, democratic government.