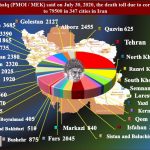 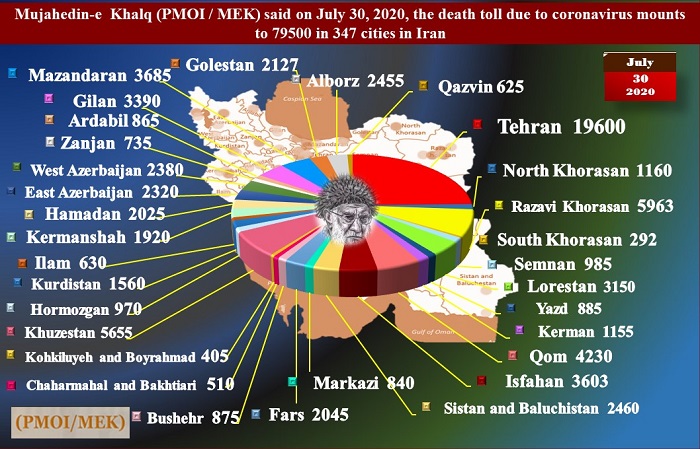 The (PMOI / MEK Iran) announced on July 30, that the number of Coronavirus victims in Iran has reached more than 79,500.

Over 79,500 people have died from coronavirus in Iran, according to the People’s Mojahedin Organization of Iran (PMOI / MEK Iran) on Thursday, July 30, 2020.

The most recently updated death tolls in the provinces are:

Iran: Coronavirus Death Toll in 347 Cities Exceeds 79,500
The People’s Mojahedin Organization of Iran (PMOI/#MEK) announced on July 30, that the number of #Coronavirus victims in 347 cities of #Iran has reached more than 79,500. #COVID19 https://t.co/1MMR6LDOpy

The Health Ministry spokesperson said Wednesday that the death count was 16,343 because the regime is well known for underplaying statistics that make them look bad. She also said that 196 people had died in the previous 24 hours and that there were just over 4,000 people in the ICU.

She advised that there is a new wave of the virus in Golestan province and that 26 other provinces (Iran has 31 in total) are in “code red or alarming conditions”, with many cities seeing rising infection rates.

President Hassan Rouhani also responded in a cabinet meeting to calls, even from within the Parliament, not to hold religious ceremonies during the pandemic, which exposed the regime’s infighting even more.

More than 79,500 people have died of the novel #coronavirus in 347 cities checkered across all of Iran's 31 provinces, according to the Iranian opposition PMOI/MEK.

Deputy Health Minister Iraj Harirchi than blamed the MEK for spreading propaganda about this, by which he probably means reporting the truth about the number of deaths as opposed to plucking figures out of thin air. But then, the previous day, he had admitted that 73 million of Iran’s 83 million population live in a coronavirus hotspot with the possibility of deaths increased over the next fortnight.

Mrs. Maryam Rajavi, head of the National Council of Resistance of Iran (NCRI), said that the coronavirus pandemic’s disastrous impact on Iran was the direct result of the Supreme Leader Ali Khamenei and Rouhani’s criminal policies.

She said: “This is a clear case of crime against humanity. Overcoming the coronavirus crisis, as in the case of resolving poverty, skyrocketing prices, unemployment, and containing the destructive nature of floods and earthquakes are all dependent on the mullahs’ regime being overthrown and the installation of a popular government to have all the country’s resources used in developing and improving people’s lives.”

Over 79,500 people have died of the novel coronavirus in 347 cities checkered across all of Iran’s 31 provinces,…