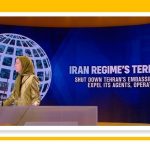 Third Day of the Free Iran Global Summit: State Sponsored Terrorism and its Links With the Iranian Regime

Written by Mohsen Aboutalebi on July 21, 2020. Posted in NEWS 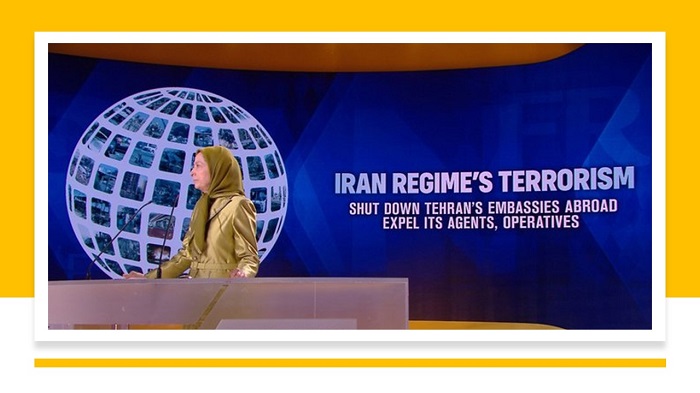 The (NCRI) and The PMOI / MEK Iran) is calling on governments to shut down Iranian embassies.

Maryam Rajavi: “Terrorism is the essence and fundamental nature of this regime and it is inseparable from it” Quote from a speech given by Maryam Rajavi, President-elect of the National Council of Resistance of Iran (NCRI) on the third day of the Free Iran Global Summit at Ashraf-3 in Albania.

I am thankful to all lawmakers, parliamentarians, and hundreds of political dignitaries from around the world who joined the Free #Iran Global Summit. #FreeIran2020 https://t.co/rNVldOThGV pic.twitter.com/AhjrJoIfVp

The main theme of the third day of the summit was the link between terrorism and the theocratic regime of the mullahs. The Iranian regime is complicit in exporting terrorism on a grand scale, yet international authorities are reluctant to tackle the theocracy head-on, preferring to concentrate on the nuclear deal. The Iranian resistance movement, spearheaded by the (NCRI) and the (PMOI / MEK Iran) is calling on governments to shut down Iranian embassies and other diplomatic posts and expel the rag bag of Iranian agents posing as businessmen, journalists, and refugees.

Mrs.Maryam Rajavi addressed the conference entitled “Iran Regime’s Terrorism –Shut Down Tehran’s Embassies Abroad, Expel its Agents, Operatives” on the third day of the online summit which was attended by hundreds of international dignitaries from Albania, Europe, and the U.S.

According to Mrs. Rajavi, the Iranian regime has already sponsored 450 terrorist operations around the world, many of which have taken place since 2003. “The clerical regime is a threat to the vital interests of the Iranian people and of people throughout the world. While carrying out suppression, executions, and massacres inside Iran, and exporting terrorism and warmongering in the Middle East, the regime is also pursuing a nuclear weapon,” she said.

Any act of firmness against this regime and any steps taken against it, anywhere in the world, will aid the Iranian's people's struggle to overthrow the regime, and is in line with international peace and security. #FreeIran2020 #Iran pic.twitter.com/wIKmg0Kszz

She further elaborated that “terrorism is the essence and fundamental nature of this regime and it is inseparable from it. … If someday, the regime abandons the export of fundamentalism and terrorism abroad and limit itself within Iran’s boundaries, it will implode and disintegrate.”

Mrs. Rajavi said that Iran’s reign of terror started in earnest after the quasi-occupation of Iraq after the 2003 Iraq war. She named Afghanistan, Yemen, Lebanon, Syria, and Iraq as the most affected countries that have suffered from terrorist activities financed and organized from Tehran. These activities have included mass killings, the bombing of schools, religious gatherings and markets, kidnappings, assassinations, and the resulting displacement of many millions of refugees.

The right policy can be summed up in a single word: firmness. That means firmly dispensing with everything that enables the regime's terrorist activity, and firmly responding to every single criminal act. #FreeIran2020 #Iran pic.twitter.com/1firQejYKO

She added that “so far, western governments have made catastrophic mistakes when it comes to confronting the Iranian regime’s terrorism. For example, they have played right into the regime’s hands by acknowledging that its terrorism is a sign of its power and strength.

However, there has always been a direct link between the escalation of uprisings and intensification of the regime’s social and economic challenges on the one hand, and its resort to terrorism on the other. It was not the power of the regime that made the expansion of its terrorism and fundamentalism possible, it was this appeasement policy. The ruling mullahs have interpreted western governments’ appeasement or their turning a blind eye as a sign of weakness, encouraging them to increase their aggression.”

She said that it was a mistake to hope that the mullahs would somehow moderate their behavior if the international community appeased them or offer incentives. She said that instead, the right strategy should be to deal with the regime with “firmness and decisiveness.”

“The regime’s terrorism, she stressed, grows, and expands under the shadow of silence, denial, ignorance, turning a blind eye and looking the other way. It is time for all this ignorance about the people of the world’s fate, security, and peace to end,” she said.

That is why, sometime before this plot, notorious agents of the regime's intelligence service in Europe had started to spread lies about "mysterious murders" within the PMOI/MEK. #Iran pic.twitter.com/MohtrwGSX5

Mrs. Rajavi went on to make concrete suggestions for the international community to take to combat the mullahs’ regime and its criminal activities.

She emphasized the importance of cutting diplomatic ties with the regime, closing all commercial organizations that are closely tied to the regime, and expelling any Iranian regime operatives masquerading as legitimate businessmen, journalists, or refugees.