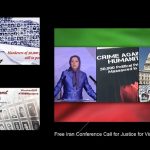 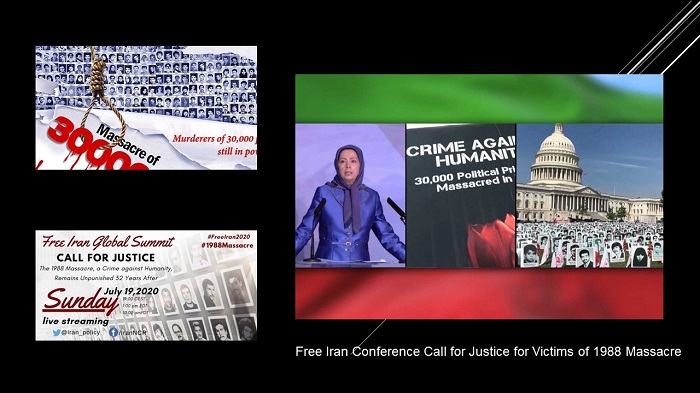 On Sunday, July 19, MEK supporters gathered online for the second day of the Free Iran conference. Day Two of the event focused on the regime’s efforts to eliminate the MEK. Speakers called for an independent investigation into the 1988 Massacre of 30,000 MEK political prisoners and asked that the perpetrators of the massacre be held accountable. They also discussed the ongoing campaign to demonize the MEK and National Council of Resistance of Iran (NCRI) through disinformation and media manipulation. The following are highlights from Sunday’s speeches:

Ingrid Betancourt, ex Colombian Senator: Iran's regime holds population as hostages & uses the name of God to do evil. Iran's people understand that the best way to hold this regime to account is to overthrow it. #FreeIran2020 #1988Massacre https://t.co/oKNxdvXbtr

“The regime holds the Iranian population as hostages and uses the name of God to do evil. This is why Iranians inside Iran and abroad are protesting. At the same time, the regime tries to blame the MEK for its crimes. But after Friday’s rally, it is foolish to think anyone will fall for this propaganda.

Ex UN Judge Geoffrey Robertson QC: “32 years ago, I interviewed 40 survivors of the #1988Massacre massacre, & I was staggered by my findings. I described it as the worst crime against humanity since the World War 2. #FreeIran2020 https://t.co/kfwzRNkDwh

“When we come out of the pandemic, there will be a greater view of human rights. The people will take down the statues of the ayatollahs and rewrite the history of Iran. I also think there is a movement in the human rights world that identifies human rights villains. Name them and shame them, and prevent them from entering their countries.”

.@GiulioTerzi: Iran regime’s embassies, which are launching pads for terrorist attacks, must be closed. The perpetrators of the #1988Massacre must be held to account. https://t.co/SVEOeCFsxz#FreeIran2020

“The regime’s embassies, which are launching pads for terrorist attacks, must be closed. The perpetrators of the 1988 Massacre must be held to account. One of them is the head of the judiciary and another is a justice minister. The time for impunity is over.”

.@steve_mccabe: Iran's regime has launched a campaign to demonize the #MEK That campaign is linked to the #1988Massacre The mullahs have tried to cover up the extent of the massacre.
#FreeIran2020 https://t.co/tiKu1N2P9o

“We know who the oppressor is and what must change. You can’t lock up everyone and murder everyone. Freedom survives and the tide is changing.”

.@VidalQuadras: It is indeed a matter of the political will of the int’l community to pursue justice for #1988Massacre in Iran. All the perpetrators of this crime will be held accountable in international courts. #FreeIran2020https://t.co/TbEaUoPr5H

“We must not forget that even though this regime is cruel and brutal, it lies about many things, including its strength. It is weaker than it shows and right now it is at its weakest. The international community must not fear the regime and should pursue justice.

Ex UN Official Tahar Boumedra: In 2018, the former Human Rights Commissioner Zeid Hussein said the UN has informed Iran's regime to investigate #1988Massacre Let’s warn the UN that enough is enough. regime will not investigate its own crimes. #FreeIran2020https://t.co/ISepMCbTxv

“In 2018, the former human rights commissioner Zeid Hussein said the U.N. has informed the regime to investigate the crime. Two years later, the Special Rapporteur on Human Rights in Iran is asking the same thing. We know the mullahs’ regime will not investigate. It is naïve to believe the mullahs would investigate themselves.”

“Is there any other resistance group advocating universal values in Iran? Is there any other resistance group capable of organizing a virtual event with thousands of participants from around the world? The regime sees these events and knows that the NCRI and MEK are fully capable, more than anyone else, of organizing a peaceful transition of power after the mullahs’ fall.”

“After the 1988 Massacre, they started telling the people they could not use the name of the organization or risk losing their lives. Then they tried to say the PMOI is not popular. They tried to repeat the lie again and again until it was believed. Unfortunately, our governments believe the propaganda and lies of the mullahs’ Ministry of Intelligence and Security (MOIS) to keep trade ties with the regime.”

Former Palestinian Chief JusticeTaisi al-Tamimi: Islam is only a cover for Iran's regime. We need to prosecute these criminals in court. We must work together so this regime does not remain in power #1988Massacre #FreeIran2020 https://t.co/t7cKNAph1R

“We are at the painful anniversary of the 1988 Massacre. The people who were killed included more than 700 prisoners under the age of 18 and 62 pregnant women.”

.@kenblackwell: . By supporting Iran's people, we give humanity and freedom a fighting chance. We take the risks to be supporters that there be actions taken against this regime . Let’s commit to be a force for change. #FreeIran2020#1988Massacre https://t.co/RGU5slZH6p

“We must expose this regime and their reign of terror with what we can. We must demand that the world court tries these criminals for their crimes against humanity.”

Former U.K. Speaker of the House of Commons

Baroness Betty Boothroyd, former Speaker of UK @HouseofCommons
: #FreeIran2020 is within reach. That is why I stand with you. I call on UK government to recognize @Maryam_Rajavi & NCRI & the true representative of the people of Iran #1988Massacre https://t.co/ocl4EMJSPw

“Maryam Rajavi and her message of freedom make the regime change to its core. Her ten-point plan provides a democratic alternative for future generations of Iran and gives women a chance to lead their country.”

“If you care about human dignity, human rights, civil life, join the current campaign against the regime in Iran. The world, the people of Iran need a regime change. If you’re a supporter of human rights, you must be an opponent of the regime of Iran.”