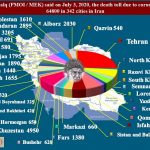 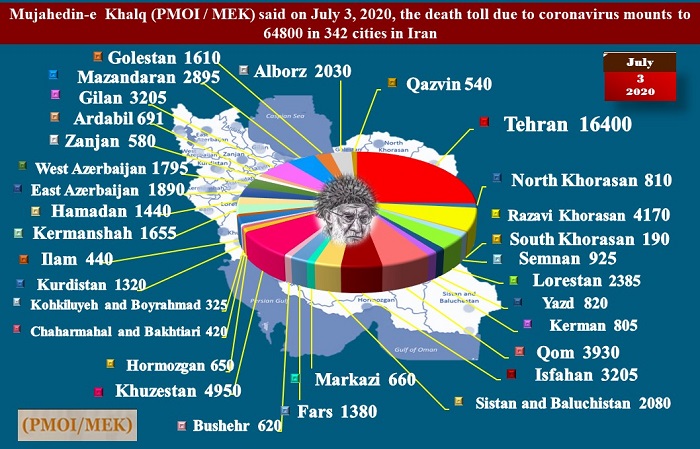 The (PMOI / MEK Iran) announced, that the Coronavirus death toll in Iran is more than 64,800.

The latest reports from the People’s Mojahedin Organization of Iran (PMOI / MEK Iran) indicate that more than 64,800 people have died after contracting COVID-19 in Iran. The main opposition (PMOI / MEK Iran) to the Iranian regime has said that every single province in the country has been affected by the outbreak.

The latest figures from the regime, on the other hand, state that the death toll stands at just a fraction of that reported by the (PMOI / MEK Iran). The regime says only 11,106 people have died.

Since the beginning of the outbreak, the Iranian regime has covered up the extent of the situation and has underreported the death toll. However, in recent weeks, the regime has been unable to maintain its claims that the situation is under control.

The head of the Coronavirus Task Force in Tehran, Alireza Zali, said on Thursday 2nd July that the number of people that have had to be hospitalized because of the virus has increased by just under 8 percent in the space of just 24 hours.

Another member of the Coronavirus Task Force in Tehran, Masoud Mardani, warned that the situation in Tehran is “very dangerous”, pointing to the huge increase in the number of cases, the rise in deaths and the number of people needing hospital care.

Minoo Mohraz on the same task force said that the autumn and winter period is looking very uncertain because of a second Coronavirus peak coupled with the influenza virus. Mohraz said that the situation has gone back to the way it was during the first peak and that “everyone is tired”.

Elsewhere in the country, the situation is barely any better. In the province of Golestan, eight counties are in critical condition with regards to capacity in hospitals. The situation is similar in the province of Ilam where there has been a 40 percent increase in cases in less than two weeks. The health deputy of the province’s medical sciences university said that “this is a warning for public health”.

More than 64,800 people have died of the novel #coronavirus in 342 cities checkered across all of #Iran's 31 provinces, according to the Iranian opposition PMOI/MEK. pic.twitter.com/zqHp3CCiWM

A dean of a medical sciences university in the province of Kerman recently spoke about the immense pressure being put on health services and medical workers. They said that exhaustion is common among health workers because of the huge increase in workload meaning that not only is the efficiency of care reduced, but also doctors and nurses are falling ill.

The regime’s neglect, mismanagement, and indifference have resulted in the outbreak becoming wholly unmanageable. Swift and decisive action at the beginning is what was required, as well as complete transparency. However, the regime failed on this front and it is once again the people that are paying the ultimate price.