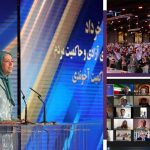 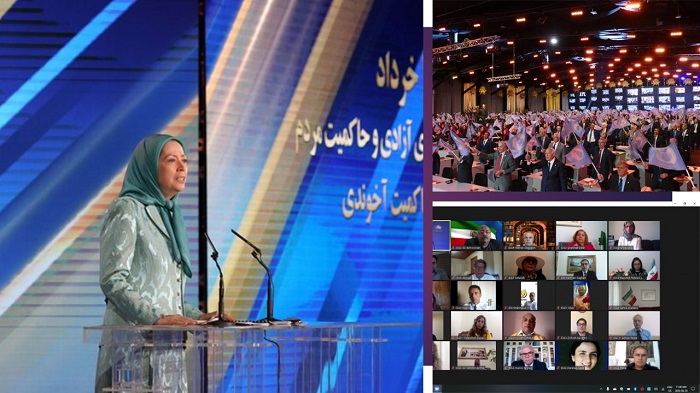 Iranians, supporters of the (PMOI / MEK Iran) and the  (NCRI), joined a virtual conference on June 20th.

Iranians, supporters of the People’s Mojahedin Organization of Iran (PMOI / MEK Iran) and the National Council of Resistance of Iran (NCRI), joined a virtual conference on June 20th, honoring the start of the fortieth year of resistance against the religious fascism that has been ruling Iran since 1979.

A significant event in these last few decades was in 1981 when 500,000 MEK supporters in Tehran took part in a peaceful protest which assembled outside the Majlis (Parliament). At that time the Supreme Leader, Ruhollah Khomeini, directed the Revolutionary Guards (IRGC) to fire on the protesters, causing the deaths of hundreds, while thousands were arrested and eventually executed.

June 20 has since 1981 been called the day for the Martyrs and Political Prisoners. This was the start of the regime’s reign of terror over Iran. Since that time, the MEK leader, Mr. Massoud Rajavi, founded the National Council of Resistance of Iran (NCRI) as a credible replacement for the regime. The MEK has since maintained its position as being the largest of the group. It has never been easy being part of a resistance movement in Iran since 1981, as 120,000 member’s lives have been lost due to the brutal regime’s aim of eliminating its viable opposition.

Since the outset, we have declared that our struggle is not for taking power, but to realize the Iranian people’s desires for the establishment of freedom, justice and democracy at any cost. #Iranhttps://t.co/czxJDHGp5o pic.twitter.com/gnFsQp3jJE

As time has gone by, the protests and uprisings have increased, as can be seen by the protests in November 2019.

This virtual conference enabled key supporters to come together to express their praise for the MEK’s continuing struggle to bring about freedom and democracy in Iran.

The following are summaries of some of the comments made at the virtual conference:

She commended the sacrifice made by the resistance movement by referring the 120,000 PMOI members who have suffered brutal torture for their beliefs and many have been executed.  She also said that the regime today was becoming increasingly afraid of the resistance movement as there is more dissent within mainstream Iranian society. She concluded by saying she stood with the resistance as it fought for freedom and democracy,

“Nothing can prevent your greatest victor. We are together, yesterday, today, and tomorrow.”

He said the European states should be uniting together to condemn the regime’s leaders for the murder of political prisoners and not sit back and pretend it is not happening. He said he is an Ashrafi and he wholeheartedly supports the resistance movement,

She said she was extremely impressed by the action of Iranian women and girls who have to put up with “the regime’s misogynist rule.” She also renewed her support for Maryam Rajavi’s initiative of protecting women’s rights in Iran.

He said that it has been more than forty years since the people’s revolution was hijacked by the mullahs but now the fight to overthrow him has started to strengthen. He supports Maryam Rajavi as being the new leader of Iran and mentioned that “The regime’s Ministry of Intelligence and Security (MOIS) has admitted that it employs agents against the PMOI because of the growing support for the opposition.”

She said that the Iranian people in the last 4 decades have never accepted the regime and their resistance has continued all these years but now the voices have become louder and the overthrow of the regime is getting closer. Despite the killings in the 2019 protests, the resistance is fighting a more aggressive battle and is gaining more and more support. The MEK, she reminded the conference, is the sole organization globally that fully supports gender equality and the leader, Maryam Rajavi, is paving the way for more equality in Iran and is the right person for this job.

"We in Europe stand with the Iranian people and their organized Resistance for democracy and freedom led by @Maryam_Rajavi," said former Speaker of the German Bundestag Rita Süssmuth.#FreeIran2020https://t.co/kp2pVdwz6A

“The international community must not remain silent” are the words of Faisal Odeh Al Rfouh, former Jordanian minister. He reminded the conference of how the regime has left the Iranian people out in the cold in the fight against COVID-19. Nothing has been done to help to save the thousands of lives lost to this deadly virus. No money has been directed to ensure the health and well-being of the people and those trying to escape the virus by breaking out of prison have been executed. He goes on to say that it is the mullahs that are causing trouble throughout the regime as well as internally within their own country.

He says there is no better time to support the Iranian resistance as its popularity grows and everyone should be supporting their aim for freedom and democracy in Iran. He said “all forces must unite to support the resistance in Iran to finish this history of terror that is 40 years old.’’

LIVE STREAM on social media networks of the NCRI and Maryam Rajavi Conference on the 40th anniversary of the Iranian people’s nationwide Resistance, the Day of Martyrs and Political Prisoners in #Iran #FreeIran2020https://t.co/D3Wk6pxSHw

She says the resistance movement has the Iranian people’s support of its agenda and there is no better time than to stand with their leader, Maryam Rajavi, and “move toward a free Iran.” She particularly alluded to Maryam Rajavi’s view on establishing gender equality in Iran which she sees as a major goal and an example to the world. She praised Maryam Rajavi for steadfastly supporting change for the Iranian people and wished that there were more people like her in the world today.