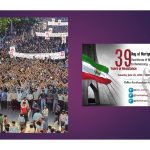 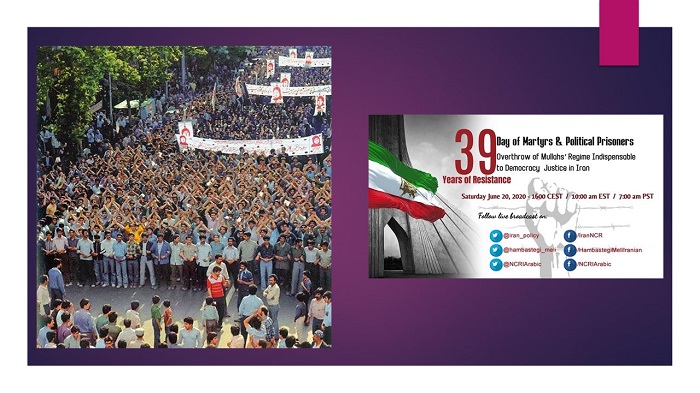 On Saturday, June 20, MEK supporters will host their annual Free Iran conference. The virtual conference will be attended by thousands of MEK supporters, members of the Iranian diaspora, and political dignitaries from around the world who share the Iranian people’s goal of ending the mullahs’ regime and bringing freedom and democracy to Iran.

Saturday’s conference falls on the Iranian Resistance’s Day of Martyrs and Political Prisoners and marks 39 years of struggle for a free Iran. The event will be broadcast on Twitter by the National Council of Resistance of Iran (NCRI) at 10 AM CST/7 AM PST @iran_policy.

Topics will include the regime’s mishandling of the COVID-19 pandemic, plundering of the people’s wealth on illegal nuclear and ballistic weapons programs, warmongering in the Middle East, domestic oppression and human rights violations, and cybercrimes at home and abroad. The conference will also address the role of the international community in supporting the Iranian people’s uprisings and providing diplomatic support as they work toward their stated goal of regime change.

More than 52,400 people have died of the novel #coronavirus in 332 cities checkered across all of #Iran's 31 provinces, according to the Iranian opposition PMOI/MEK. pic.twitter.com/nJRkPU2oaD

Origin of the Iranian Resistance

In 1979, the Shah of Iran was overthrown in an anti-monarchic revolution. Ruhollah Khomeini seized power through deception and false promises and quickly used force to establish complete control. Within months, women and religious minorities lost virtually all their rights, and the country descended into a dictatorship ruled by Islamic fundamentalists under “Velayat-e Faqih,” or absolute clerical rule.

The MEK and its leader, Massoud Rajavi, firmly opposed this form of government and fought to fill the regime’s new Majlis (parliament) with MEK members. Rajavi attempted to run for President in 1981 but was prevented from doing so because of his opposition to Velayat-e Faqih. Despite widespread support, no MEK members were elected to Majlis due to ballot tampering.

Meanwhile, Khomeini had mobilized a crackdown on MEK members in an attempt to eliminate his competition. Between 1979 and 1981, at least 70 MEK supporters were killed by the new regime and several thousand more were imprisoned.

Finally, on June 20, 1981, the MEK organized nationwide protests to Khomeini’s tyrannical new regime. The response was overwhelming. Protests were held in cities across the country, but the largest was in the city of Tehran. More than 500,000 peaceful protesters marched through the streets of Tehran toward Majlis, where they were greeted by armed Revolutionary Guards (IRGC), who opened fire on Khomeini’s orders. Hundreds of protesters were shot in the streets at random and thousands more were arrested. The following day hundreds of arrested protesters were executed. Some were unidentified, including two 12-year-old girls.

June 20, 1981 marked the beginning of the Iranian Resistance movement. Since that date, more than 120,000 MEK members and supporters have died at the hands of the Iranian regime. In the summer of 1988 alone, 30,000 MEK supporters were executed by the regime in the 1988 Massacre and buried in unmarked mass graves. Their only crime was a refusal to denounce the MEK.

Ruhollah Khomeini zealously fought to eliminate the MEK at any cost, and his successor, Ali Khameini, has chosen the same path. The MEK is an existential threat to the mullahs and their system of oppression, corruption, and destruction. The mullahs know that they cannot maintain power without brute force, so they have dedicated themselves to destroying the viable democratic alternative.

On July 21, 1981, Massoud Rajavi founded the NCRI, a coalition of Iranian opposition groups with the shared goal of replacing the religious dictatorship with a democratic, pluralist and secular state. The ruling regime has gone to great lengths to destroy and delegitimize the NCRI and the MEK. The Iranian Resistance has weathered propaganda attacks, missile attacks, diplomatic attacks, and terrorist attacks, but it has prevailed. The MEK has used the courts, the United Nations, and the internet to protect its name and grow.

The mullahs’ regime is on its last leg, and the Iranian Resistance is growing in size and influence. The international community has an opportunity to support the Iranian people as they take back the revolution that was stolen from them in 1979. Join the Iranian Resistance at the virtual Free Iran conference on June 20, 2020 at 10 AM CST/7 AM PST on Twitter @iran_policy.