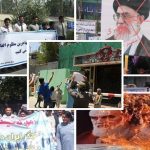 People of Afghanistan protest against Iranian regime’s crimes against migrants

Written by Mohsen Aboutalebi on June 13, 2020. Posted in NEWS 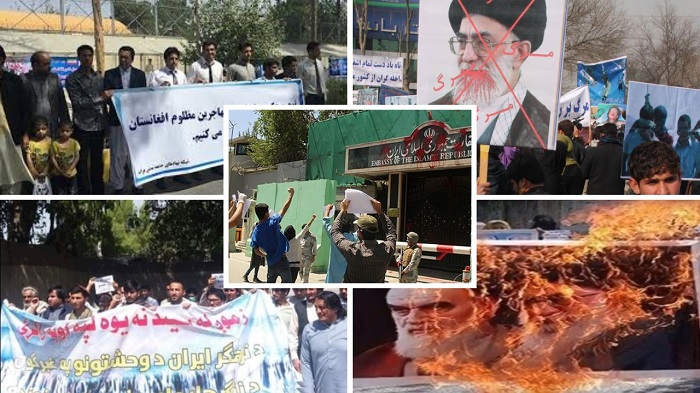 MEK Iran: Afghan citizens gathered outside the Iranian embassy in Afghanistan to show their anger against the Mullahs regime in Iran.

In the city of Kabul, hundreds of Afghan citizens gathered outside the Iranian embassy. They voiced their anger and outrage about the treatment that Afghan migrants have been subjected to by the Iranian regime.

The Afghanistan Solidarity Party organized the demonstration and supported those voicing their anger.

Several recent incidents have sparked the anger of the Afghan migrant community. One such incident was the vehicle carrying Afghan citizens that were attacked by forces of the Iranian regime. This incident ended with several Afghans being burned alive. Reports surrounding the incident that happened on Thursday 4th June indicate that agents of the Iranian regime opened fire on a car in Yazd in the central part of the country. The car crashed and subsequently caught fire. Several people were gravely injured and three people died. Reports say that the agents involved in the incident immediately fled.

The aftermath of the incident has further outraged many, with officials trying to turn the blame back on the people in the car. The political deputy of the Governor of Yazd Ahmad Tarhomi Behabadi said that the victims did not listen to warnings given by the security forces, therefore the perpetrators of the crime cannot be blamed.

This incident comes just a few weeks after a previous incident in which dozens of Afghan migrants were killed by border officials. At the beginning of May, it is believed that dozens (more than 50) of Afghan migrants were killed. They were arrested by agents of the Iranian regime’s security forces, and subsequently brutally tortured, and then drowned. The security forces involved in the incident were Iranian regime border guards.

The treatment of these migrants, although shocking, is not surprising. The Iranian regime is brutal and treats its citizens with such disregard. Widespread corruption that has lasted for many years has led to the regime’s current crisis. It has destroyed the country’s economy, partly due to the terrorist activities it has been sponsoring across the world, and it is in a desperate situation.

The people of Iran have been putting pressure on the regime that is already under immense pressure from the international community, in particular the United States. The Coronavirus outbreak has exacerbated the many existing problems, including unemployment and other social crises.

(PMOI / MEK Iran) considers this horrific crime to be an example of a crime against humanity and an example of the unbridled cruelty of the ruling clerics of Iran and the repressive forces under their command.

The killing of Afghan refugees by the anti-human regime is a crime against humanity.https://t.co/hzQHea6rou#Iran #HumanRights #MEK @USAdarFarsi pic.twitter.com/QOD2KPLs7Z

The Afghan protesters in Kabul graffitied on the regime’s embassy and called on the ambassador to be expelled. Following years of chaos and war, many Afghans migrated to Iran. The regime was offering a monthly salary which attracted many migrants, but they were treated very badly and were forced to fight on Iran’s behalf in Syria.

Many of the young migrants were killed while fighting for the regime and Syrian dictator Bashar al Assad and their families were left with nothing. The regime’s disregard for the lives of others is alarming.

The Iranian Resistance (NCRI) has highlighted the Iranian regime’s crimes in this regard and urges the international community to hold it accountable for its crimes against migrants.