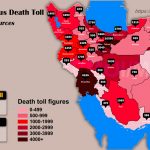 Written by Jennifer Jones-Kelley on June 13, 2020. Posted in NEWS 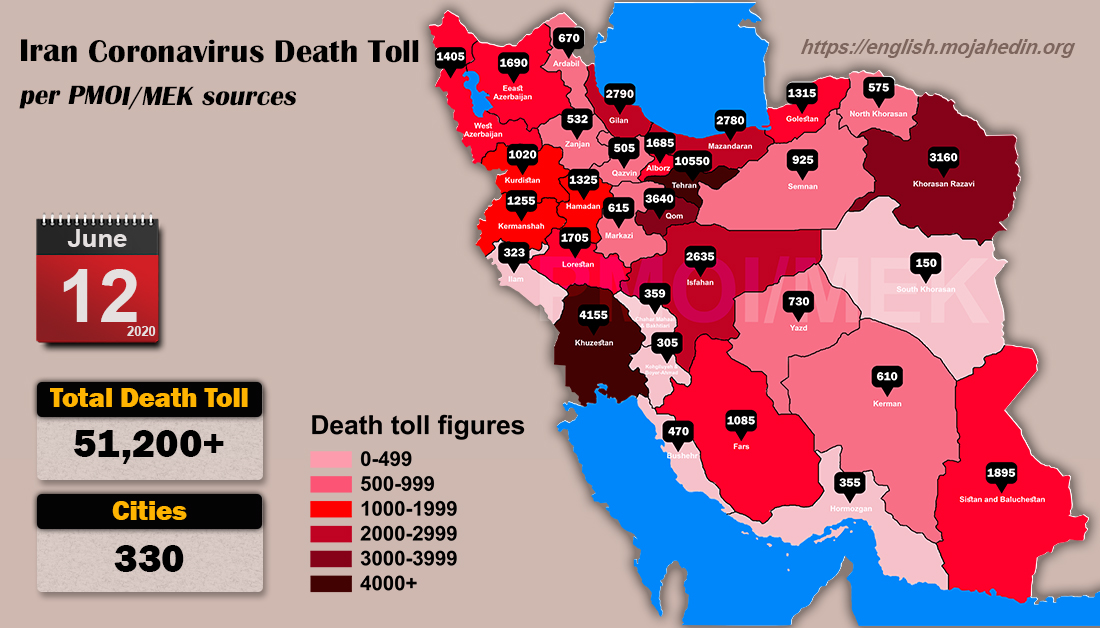 More than 51,200 people in 330 cities in all 31 provinces in Iran have died from COVID-19, the disease caused by the novel coronavirus, according to a report released Friday by the (PMOI / MEK Iran). The regime has confirmed a total of 8,659 COVID-19 deaths, which is approximately one-sixth of the actual number of fatalities.

Deaths by province include:

More than 50,700 people have died of the novel #coronavirus in 327 cities checkered across all of #Iran's 31 provinces, according to the Iranian opposition #PMOI #MekMild https://t.co/IksfdahQfD#Iranian #coronavirus @USAdarFarsi #MullahCovidHolocaust https://t.co/PqjX0bjKAX pic.twitter.com/mxpsVI7MwC

On Friday, June 12, Nasrollah Fathian, the regime’s Advisor to the Minister of Health and Head of the Coronavirus Combat Command Center, warned of worsening conditions in several provinces in a report to the Quds Force-affiliated Tasnim news agency. “The provinces of Khorasan Razavi, Bushehr, Hormozgan, Khuzestan, and Lorestan are in a red situation, and we have the most critical situation in Khuzestan,” he said.

State television in Kermanshah Province reported a grim milestone on Friday, as the number of confirmed coronavirus patients in the province surpassed 300. “For the first time since the Coronavirus outbreak, the number of patients crossed the 300 thresholds in 24 hours, and according to the head of the public relations committee of the University of Medical Sciences, the number of definitive cases in the Province reached 314 last night,” said the report.

The Tasnim news agency described alarming conditions in Kurdistan Province on Friday. The agency reported: “Following the increase in the number of people infected with the Coronavirus and the continuation of the red state, the Towhid Hospital in Sanandaj was completely allocated to Coronavirus patients. The number of Coronavirus patients is increasing sharply. The president of Kurdistan University of Medical Sciences said: ‘According to the review of the infection charts … Be’ sat, and Kowsar hospitals in Sanandaj are also considered as the second and third backup of Towhid Hospital.’”

On Friday, the Vice-president of Tabriz University of Medical Sciences expressed concern about the rate of new coronavirus infections in East Azerbaijan Province, saying: “The prevalence of Coronavirus has increased in the past few days in the province, and we are one of the provinces on the verge of warning.” The IRGC-affiliated Javan website reported on Friday that nine out of 21 cities in the province are considered red areas.

On Friday, Minister of Intelligence and Security (MOIS), Mahmoud Alavi tried to reassure the regime’s security forces that there is no threat of an uprising. “At the beginning of the Coronavirus outbreak, we were concerned that economic and social issues and their complications would cause security challenges. We believe that it has not,” he said, according to the state-run Mehr news agency.

Alavi’s comments stand in stark contrast to the recent protests that have sprung up across the country. The (PMOI / MEK Iran) previously reported that Iranians are starting to take their old grievances to the streets again, and the regime is well aware of this. Alavi’s statement also undermines the regime’s decision to fund a massive increase in police presence in Tehran. If there are no additional security challenges, then why does the regime need additional security?

Alavi appears to have said the opposite of what he meant, a condition that afflicts many within the Iranian regime.