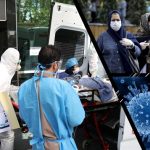 Every single province in Iran has been affected by the outbreak and 301 cities have been battling with this health crisis.

The Coronavirus outbreak in Iran has claimed tens of thousands of lives and the number is still rising every day. Since the very beginning of the outbreak, the Iranian regime has mismanaged the situation and it continues to under-report the true death toll.

It became clear during the early days of the outbreak that the Iranian regime was not going to properly inform the people or the international community about the extent of the outbreak. It is for this reason that the main opposition to the Iranian regime, the People’s Mojahedin Organization of Iran (PMOI / MEK Iran), has been reporting on the reality of the situation.

Every single province in Iran has been affected by the outbreak and 301 cities have been battling with this health crisis.

The Iranian President maintains that there have only been a fraction of the 36,200 deaths reported by the opposition, but as time goes on he is losing the silence of other state officials that can no longer keep quiet about these blatant lies.

Over 36,200 people have died of the novel coronavirus in 301 cities.https://t.co/KQjbK25fAw#Iran #MEK #COVID19 #coronavirus @USAdarFarsi pic.twitter.com/SowM9z5fZz

The regime is very concerned that there is going to be a further outpouring of dissent on the part of the people, so it is once again ramping up its suppressive policies. Security measures are being strengthened and the regime is trying to use the health crisis as a way to maintain its grip on power.

Showing that freedom of speech has been curbed, the dean of Lorestan Medical Sciences University, Mohammad Reza Nikbakht, said that the establishment has been ordered by the security department of the Ministry of Health and also by the Supreme National Security Council to abstain from reporting or speaking out about the Coronavirus outbreak. He said: “In this country, we receive orders from the higher authorities. We can only obey.”

The people in Iran are horrified that the regime is covering up such a significant crisis – one that affects the whole population and one that is having a devastating impact on the people.

The people have been supported by the PMOI / MEK Iran since the very beginning, as they have been for the past few decades, and they are working together to finally achieve freedom, democracy, human rights, and peace in Iran.

The opposition has numerous so-called “Resistance Units” the whole way across the country, and they have been multiplying in numbers. Members of the MEK Resistance Units have been acting as a beacon of rebellion in the face of the oppressive rule of the mullahs.

Also last week, members of Resistance Units wrote slogans on walls across several cities highlighting their support for the opposition and their abhorrence for the ruling regime. They also took the occasion to call for the people to “rebel and rise up”.