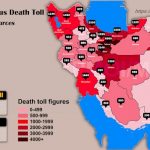 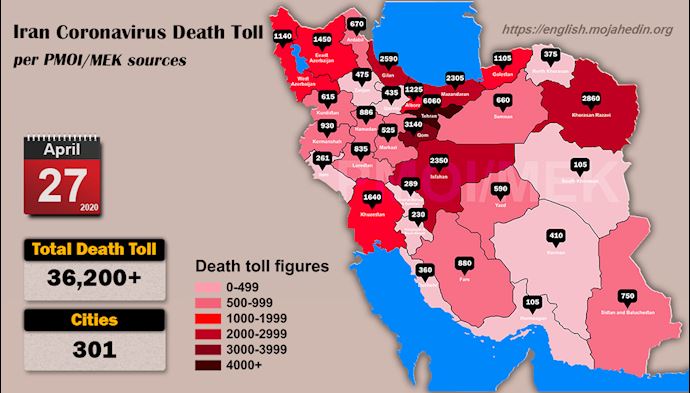 According to the main Iranian opposition group, the People’s Mojahedin Organization of Iran/ Mujahedin-e Khalk (PMOI/MEK Iran), the Iranian regime has under-reported the number of fatalities from Covid-19 by a factor of at least 7.

The number of dead across 301 cities in Iran is now over 36,200, according to the Iranian resistance movement. This is far higher than the official statistics reported to the World Health Organization by the Iranian government. Official figures have put the death toll at only 5,650.

The mullahs’ regime in #Iran is crumbling as the body bag count caused by the bungled handling of the spread of #coronavirus rises.https://t.co/D68jZMBidV#MEK #COVID19 @USAdarFarsi pic.twitter.com/qgnDdsFu6c

Even the regime’s officials and medical experts are expressing deep concern about the discrepancy between what the regime is reporting and what is happening on the ground. Particular concern has been voiced about the regime’s decision to get people back to work.

The Covid-19 Task Force HQ’s Epidemiology Committee issued an official report indicating that there was an increase in cases of the disease and deaths from it in at least 9 provinces. The state-run Hamshahri website listed the affected provinces as Qom, Markazi (Central), Ilam, Ardabil, Gilan, Golestan, Hamedan, Kohgiluyeh & Boyer Ahmed, and Khuzestan.

The head of the Task Force, Alireza Zali, said that it was a mistake to re-open parks across Tehran as it was sending the wrong message to the residents of the city. “They are thinking the situation has improved in Tehran. The expansion of this illness in Tehran has not reached a decreasing phase,” he said to state-run TV. There were 68 individuals placed in ICU in Tehran and 247new cases of the disease that required hospitalization.

Gilan Province has witnessed a new surge of sickness, according to Mohammad Hossein Ghorbani, spokesperson for the Health Minister in that province. He said that re-opening the province to the public was a “strategic mistake.” The surge of cases, which peaked at 700 new cases reported on the 20th April, has exhausted Gilan Province’s medical teams, according to Ghorbani, as quoted by the state-run daily, Setareh Sobh.

The number of cases of Covid-19 has also begun to rise significantly in Sistan and Baluchistan Province. Most of this increase has come from that part of the population who don’t have permanent jobs and are forced to earn a subsistence income by going to work every single day. A member of the Majlis, Alim Yar Mohammadi, who represents the city of Zahedan, said that the surge in cases in the province followed newly granted permission from the government for these people to go back to work. “74% of the population is below the poverty line,” he said. “If the government had devised plans for these people so they could stay at home, this wouldn’t have happened.”

The Mashhad Medical Sciences University’s dean said that the city of Mashhad and the Razavi Khorasan province is not out of the red. “The situation is red and we must expect a disaster. We must prepare for the worst,” he said.

The number of Covid-19 cases in Tehran is far higher than the number officially reported, according to a member of the scientific delegation of Tehran Medical Sciences University, Dr. Massoud Yunessian. He says that because of inaccuracies and inconsistencies in testing procedures, the real number of cases in Tehran is probably 20 times as much as has been reported.

In Lorestan Province, the dean of the Lorestan Medical Sciences University, Mohammad Reza Nikbakht, complained to Aflak TV that he and other medical staff were told not to report the dire situation in the province. ‘We receive orders from the higher authorities. We can only obey,” he said.

Regime officials and state-run media continue to express their worry that the economic hardship caused by the coronavirus crisis could lead to an explosion of social discontent in the country. “Businesses have been damaged. Inflation is rising and unemployment has soared – this is a recipe for unrest and societal collapse,” according to the state-run daily, Aftab-e Yazd.

Even the price of bread has risen, according to state-run media. In Khuzestan Province, for instance, bread prices have risen by 50%. This shows that the regime doesn’t show any sign of helping the people of Iran. The regime has embarked on a new wave of oppression on the Iranian people, who continue to suffer the privations caused by Covid-19 and the virus that is the mullahs’ regime, according to the president-elect of the National Council of Resistance of Iran (NCRI), Mrs. Maryam Rajavi.