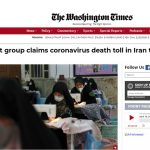 Written by Mohsen Aboutalebi on April 10, 2020. Posted in NEWS 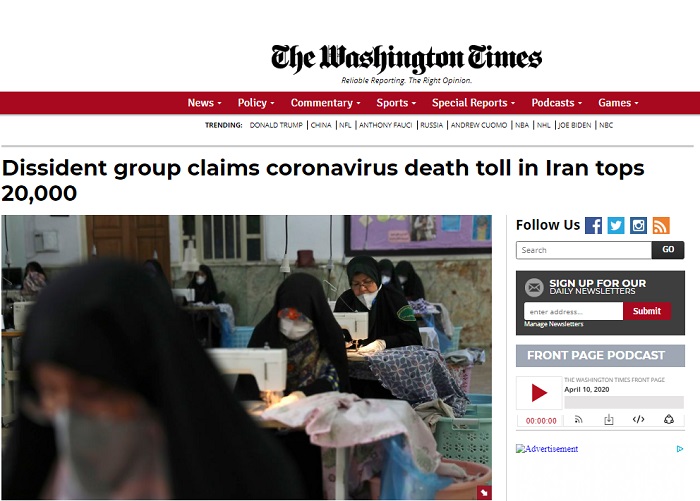 The Washington Times writes about coronavirus in Iran

On Wednesday, April 8, The Washington Times published an article by Lauren Meier about the death toll from the coronavirus in Iran. The article, titled “Dissident group claims coronavirus death toll in Iran tops 20,000,” summarized.a Wednesday briefing from the National Council of Resistance of Iran (NCRI) that provided the most recent information relating to the coronavirus crisis in Iran along with the regime’s attempts to conceal the outbreak and then undercount its victims.

As of Thursday, the Iranian regime has reported 66,220 coronavirus cases and 4,110 deaths. But the exiled National Council of Resistance of Iran (NCRI) claimed Wednesday that the government has not been honest about the death toll, and say the toll is more than 20,000 to date with infections of more than 500,000 among its 83 million people,’ wrote the article. On Friday, the MEK Iran announced that the death toll had risen to 23,900.

More than 23,900 people have died of coronavirus in 261 cities checkered across all of Iran's 31 provinces, according to the Iranian opposition PMOI/MEK.#Iran#COVIDー19 pic.twitter.com/pqDlsbpKpE

The article alluded to the MEK Iran network of members and supporters, noting that the NCRI has a “wide network of informants inside Iran.” According to these informants, at least 2.050 people have died from coronavirus in the city of Qom alone.

“reliable reporting and evidence that the regime knew about this virus as early as late January, most likely earlier, but did not inform the public or the world about it.”

The Washington Times article also described a new report released by the NCRI on Wednesday that alleges the Iranian regime concealed the outbreak for more than three weeks and “still refuses to provide accurate information about the number of fatalities.’

“The nearly month-long criminal cover-up was definitely a key factor in the rapid outbreak in Iran, a crime against humanity for which the regime’s leaders must be brought to justice,” the article quoted the NCRI report as saying.

The NCRI has repeatedly called into question claims that U.S. sanctions are to blame for the spread of coronavirus in Iran, pointing out that the regime’s coverup of the virus allowed it to spread unchecked for weeks. The NCRI report also says that the

“resources provided to Iran to counter the virus are not going to the Iranian people; instead they enter the black market, which in turn creates shortages and causes more deaths.”

“many people with milder symptoms have not been detected,’ President Hassan Rouhani ordered Iranians to return to work next week. This contradicts the advice of his own advisors. Regime Health Minister Saeed Namaki recently went on state-run television to implore the people of Iran to “stay home and follow the guidelines.”

The number of deaths is likely to rise as Iranians are forced to return to work and abandon social distancing measures. The pattern of dishonesty and concealment by the regime is almost certain to continue.