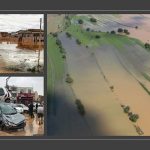 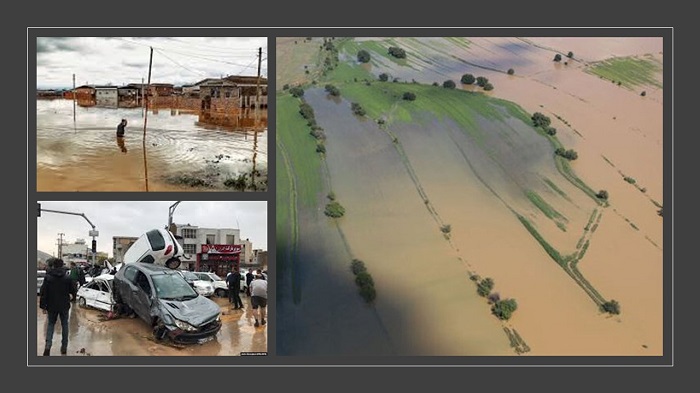 The amount of rain in parts of Iran recently has been so heavy that it has caused massive local flooding.

Poor planning and installation of necessary flood prevention infrastructure by the mullahs’ regime in Iran’s flood-stricken rural regions have led to enormous economic damage. 50 trillion Rials worth of damage has been estimated to have been done to the Kerman region alone, in South Central Iran.

The amount of rain in parts of Iran recently has been so heavy that it has caused massive local flooding. According to the Resalat, a state-run daily paper, the bridge that connects Kahnuj city to the outside world has been destroyed and 2,000 head of livestock have died in and around the town of South Rudbar. “No-one is paying attention,” says the Resalat, which continues “Many southern and eastern villages in this province are among the poorest areas of the country. Locals are desperate to just make ends meet. Due to the lack of infrastructure, the farmers who suffered from floods last year are once again facing a new catastrophe and left to endure a huge amount of damage.”

Over the last weekend, Kalat-e Naderi, a town in Khorasan Razavi Province in the North East of Iran, became flooded after heavy downpours. The town’s mayor reported that the town lacked the sort of heavy machinery that could be used in such crisis conditions. He said that after last year’s floods, government officials promised to provide sufficient cash to replace the aging machinery in the town, much of which is worn out. Some of this machinery is over 40 years old.

The head of the National Council of Resistance of Iran (NCRI), the principal opposition to the Iranian regime, President Maryam Rajavi, has asked for Iranians less affected by the floods to lend their support to those of their neighbors who have been badly affected. At the same time, President Rajavi has given her heartfelt condolences to all those affected by the Iranian floods.

Mujtaba Khaledi, speaking on behalf of the regime’s Emergency Organization, said that eleven of Iran’s provinces were particularly badly affected by the floods. Khaledi said that 21 people have so far been injured and 12 people have died.

The full cost of the flood damage across Iran is beginning to emerge. South of Kerman, over10,000 hectares of farmland are still covered by floodwater. This has led to heavy losses in crops of vegetables, fruit, and flowers. An estimated 5 trillion Rials worth of damage to crops has been done so far in this region.

With the absence of any state aid, people are taking matters into their own hands.#IranFloods pic.twitter.com/hyKiERiL1D

In southeast Iran, in the city of Iranshahr, floods damaged12 of the city’s bridges. The city of Bam has been cut off from Iranshahr because of flooding on the highway. In Borazjan, floodwaters have caused the closure of all markets and stores, while many vehicles have been covered by the water up to their rooftops.

400 billion Rials (about 2.4 million U.S. dollars) of damage has been done in Baluchistan and Sistan Provinces, in the south of Iran. 50 mm of rain was reported to have fallen in this area. Six towns in these provinces, Chabahar, Dastiari, Dolgan, Kenarak, Nikshahr and Qasr-Qand are in a critical condition according to local officials. In other parts of Iran’s southern region, 3 main highways, a city, and 130 villages have been surrounded by floodwater.