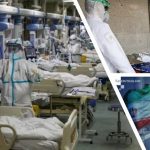 MEK Iran: COVID-19 Deaths Continue to Mount in Iran, but the Regime Continues to Turn a Blind Eye

Written by Mohsen Aboutalebi on March 30, 2020. Posted in NEWS

Thousands die due to coronavirus in Iran and the regime unable to stop it.

The chairman of the Foreign Affairs Committee of the National Council of Resistance of Iran (NCRI), Muhammad Mohadessin, reports that the Iranian regime is consistently and blatantly lying about the real t4agedy that is unfolding within Iran. The NCRI and the Mojahedin-e-Khalk (MEK Iran) are the main opposition to the regime in Iran that has been under the control of the mullahs since the Iranian Revolution of 1979.

“People are perishing,” says Mohadessin. According to data supplied to the MEK Iran from health officials that the real number of infections and deaths is far higher than that claimed by the regime. According to Mujahedin, 13,600 Iranians have died due to the coronavirus across 232 cities within the country. By contrast, the Iranian government’s official figures claim only 2,640 deaths.

Mohammad Mohaddessin the chairman of the International Relations Committee of the National Council of Resistance of #Iran attends in a #webinar about #coronavirus crisis in Iran. https://t.co/3uW3XIfgS9 #MEK @USAdarFarsi pic.twitter.com/dNvRwJL11c

Mohadessin says that the regime has maintained a consistent pattern of lying since the first acknowledgment that COVID-19 was rampant in the country.

Mohadessin, who at one time was a prisoner of the Shah of Iran and a son of a Grand Ayatollah reports that even when figures were first rolling in that the death toll had surpassed 650 deaths at the same time that the regime claimed that it was only just over 50.

The up to date figures showing the real situation in Iran have been supplied by activists in Iran, together with health officials in health centers, hospitals, and cemeteries. Mohadessin says that the regime has failed to put in place quarantine facilities and continues to deny the seriousness of the situation, saying that it is against the principles of the Revolution to clamp down on business to contain the virus.

#Iranians and #Medical staff suffers a lack of sufficient equipment amid a $#coronavirus #Crisis in #Iran.https://t.co/LIJV0daxdX#MEK @USAdarFarsi pic.twitter.com/BGHzGXolFD

Mohadessin says that all health care directives are coming directly from Iran’s Supreme Leader, Ayatollah Khamenei. “This is the only country where the people and the government are on opposite sides dealing with the virus,” he says.

“Due to hoarding and mismanagement, hospitals lack basic supplies and required equipment and facilities to counter this catastrophe. Medical facilities are exclusively controlled by the IRGC. Ordinary patients are deprived of basic needs, such as masks and disinfectant liquids; the IRGC sells them on the black market at 10 times the actual price.”