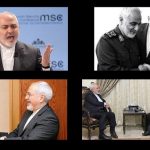 Mujahedin-e Khalq (PMOI/MEK Iran) Iran has already stated that Zarif has been an accomplice of all the crimes of the mullah’s regime in Iran in the past four decades. He is the foreign minister of a regime that killed more than 1,500 protesters, detained at least 12,000 protesters whose fate remains unknown, and injured thousands of peaceful protesters with direct live fire and brutal attacks by security forces in November 2019 nationwide uprising in Iran.

#Zarif is known to have been involved in terrorist operations overseas on behalf of #Iran regime. He has been responsible for hiring diplomat terrorists as well as MOIS agents in the regime’s overseas embassieshttps://t.co/kvAPqRlkAF#FreeIran2020 #MSC2020 @USAdarFarsi pic.twitter.com/RjgBRJEHSw

As foreign minister, Zarif is in charge of regime’s legion of so-called ambassadors and diplomatic staff around the world, which he has used in tandem with the Iranian Regime’s Ministry of Intelligence and Security (MOIS) and the IRGC Quds Force to implement terrorist operations around the world in violation of Iran’s commitments to the Vienna Convention on diplomatic relations.

Zarif’s ties to notorious terrorists around the globe is not a secret anymore. On 13 May 2016, Zarif described Mustafa Badreddin, the senior Lebanese Hezbollah commander in Syria recently killed near Damascus, as a “great and tireless man” and “full of love, sensation, and epic in defending the rightful causes of Islam.” Back in January 2014 Zarif laid a wreath and paid his respects to former Hezbollah military commander Emad Muqniye.

On 11 February 2019, Zarif met with Hassan Nasrollah, head of Lebanese Hezbollah terrorist group, in Beirut. Nasrollah expressed his gratitude for the Iranian regime’s ongoing support and Zarif assured him of the regime’s commitment to continue its support.

During the MSC, in an interview, Zarif accused the MEK to receive financial aid from the Saudis.

Lies by #Zarif, FM of #Iran’s Ruling Religious Fascism About #SaudiArabiya’s Financing the #MEK. #Zarif,8of whose diplomats have been expelled or imprisoned for engaging in terrorism in Europe, accuses the #MEK of terrorism.https://t.co/eNdIiKaLOn#IRGCTerrorists #FreeIran2020

The Secretariat of the National Council of Resistance of Iran (NCRI) in a statement, on February 15, 2020, stated:

That Saudi Arabiya or any other country provides money, even a dollar, to finance the expenses of the PMOI, whether in Iran, in the region, or internationally, is absolutely false.”

It worth mentioning that in the midst of the Iranian people’s uprising, the regime’s Supreme Leader Ali Khamenei, claimed that Saudi Arabiya pays for the MEK Iran expenses.

Parroting these lies by regime’s FM only reflect Zarif’s desperation in the face of the nationwide uprising and the Iranian people’s widespread support for the MEK Iran inside and outside Iran. It is ironic that the foreign minister of the godfather of international terrorism accuses the Iranian people’s just Resistance and MEK Iran of terrorism.

As MEK Iran has stated several times, Zarif, along with Ali Khamenei, Hassan Rouhani, and other officials of the regime must face justice for his role in crime against humanity, as did Hitler’s Foreign Minister, Joachim von Ribbentrop.