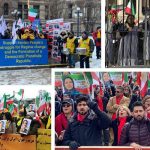 Written by Esmail Mohades on February 9, 2020. Posted in NEWS 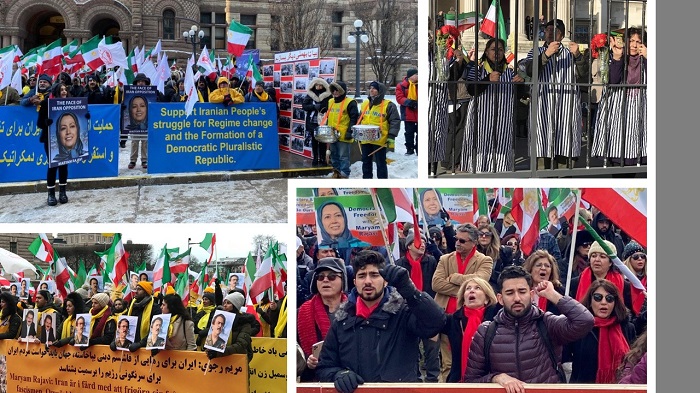 Members of the Iranian diaspora turned out in great numbers in Stockholm to take part in a rally organized by the Resistance close to the Swedish parliament to commemorate the 1979 uprising which led to the downfall of Shah Mohammad-Reza Pahlavi and put an end to monarchy in Iran.

Tribute was also paid to fallen heroes of the Iranian Resistance, Mujahedin-e Khalq (PMOI/MEK Iran) acting commander in Tehran in 1982 Moussa Khiabani, Ashraf Rajavi, and several other MEK Iran members killed on February 8, 1982, by the regime in power in Iran.

Demonstrators expressed solidarity with the Iranian people’s uprising and the Resistance units acting against repression centers in Iran. They confirmed their full support for the National Council of Resistance of Iran (NCRI) as the sole viable alternative to the mullahs’ regime.

The Iranian community stressed its support for the call by Mrs. Maryam Rajavi, NCRI’s president-elect, to consider leaders of the mullahs’ regime as criminals against humanity and for commissioning an international investigating delegation to Iran to investigate the fate of those arrested during the November and January uprisings and reveal identities of more than 1500 killed in the event.

Maryam Rajvi: international community has a duty to refer the dossier of the regime’s crimes to the UNSC, and to adopt a firm policy in the face of the regime’s HR violations, terrorism and warmongeringhttps://t.co/cF6D6mNprS#Iran #BoycottIranShamElections @USAdarFarsi #MEK pic.twitter.com/Sl7TPhN2qU

“The criminals in power in our country have a 40-year long record of corruption, untruthfulness, plunder, destruction, murder, the export of terrorism and misogyny,” Mrs. Rajavi said in a video message sent to the rally. “Your gathering today in Stockholm is yet another clear sign of the Iranian people’s unflawed resolve for putting an end to the anti-human regime of the mullahs.”

A number of Swedish members of parliament took part in the rally and spoke to the participants.

Among the speakers was Mr. Abolghassem Rezai, deputy secretary of the NCRI, as well as Parviz Khazai, NCRI representative in Nordic countries.

A similar rally was held in Washington DC, close to the White House, where a big number of Iranians rallied in support of the Iranian people’s uprising back home. Banners reading “Down with the oppressor, be it the Shah or Khamenei” joined voices to those of Iranians inside Iran whom, during the November and January uprisings, compared the mullahs’ regime to that of the Shah.

A rally followed by a march was also held in Toronto, in subzero temperatures.

London’s Trafalgar Square was also the theatre of a big rally held by MEK supporters.