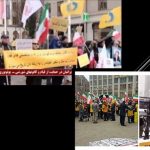 Written by Amineh Qaraee on February 5, 2020. Posted in NEWS 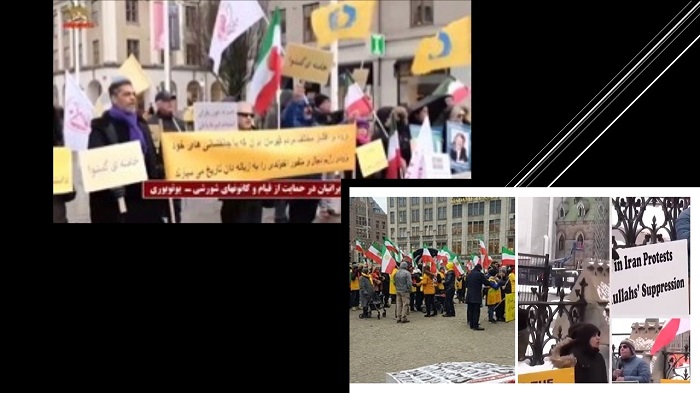 Iranian diaspora, supporters of MEK Iran, held a series of protest gathering across the globe

Iranian diaspora, supporters of the Iranian resistance groups, People’s Mojahedin Organization of Iran (PMOI/MEK Iran), and the National Council of Resistance of Iran (NCRI), around the world held protests last weekend in solidarity with the Iran uprisings.

In Ottawa, Canada, the MEK Iran, and NCRI protesters gathered, despite the cold and snow, to express their solidarity with the Iranian people. They held a banner that read, “Over 1500 people killed in Iran protests. Silence and inaction vis-à-vis the mullahs’ suppression is complicity in murder,” and chanted slogans like “Down with the oppressor, whether the Shah or the [Supreme] Leader”, “Down with Khamenei [regime’s supreme leader], Down with Rouhani [regime’s president], viva democracy”.

This pattern continued across Europe, with MEK Iran and NCRI supporters showing solidarity with the Iranians and echoing their call for regime change.

In Oslo, Norway, MEK Iran, and NCRI supporters praised the MEK’s Resistance Units inside Iran for their continuous anti-regime activities aimed at increasing the protests and bringing freedom to Iran.

At the rally, Parviz Khazaie, the NCRI’s representative in Nordic countries, said: “I can assure you that the tide has turned against this inhumane regime. This regime is in a complete ideologic, economic and political deadlock. Rouhani, who is a charlatan, who was selected by the supreme leader, now speaks of democracy and elections. This shows the regime’s total desperation.”

In Gothenburg, Sweden, Iranians and the MEK Iran supporters held pictures of scenes from the Iran protests to show the scale. They also supported the Iraqi people’s uprising against the Iranian regime’s interference in their country with the slogan, “From Tehran to Baghdad our slogan is Revolution.”

#FreeIran2020
From Malmö to #Gothenburg in Sweden, Iranians are still on rally in support of #IranProtestspic.twitter.com/SdKgM6NblA
They also cheer #Iraqi protesters with Arabic slogans

In Malmo, protesters also showed their support for the Iran uprising by holding up pictures of the martyrs of the uprising and chanting, “Iranians cry for freedom. Down with Khamenei and Rouhani”.

In Arhus, Denmark, Iranians and the MEK Iran supporters held a protest in support of the uprising and thanked Mr. Rajavi for his historic leadership and ultimate sacrifice with the chant “Massoud is our leader, so the victory is ours”.

The first wave of the Iran uprising began in November over the tripling of fuel prices. The regime killed over 1500 people, wounded 4,000 and arrested 12,000.

During the funeral of two of the victims of the downed Boeing 737-800 by #Iran’s Islamic Revolutionary Guard Corps #IRGCTerrorists protests broke outhttps://t.co/WRjAlJkaoS#iranprotest #MEK #FreeIran2020 @USAdarFarsi pic.twitter.com/NONwaK3wTk

The second wave began in January after the regime finally admitted to shooting down a Ukrainian passenger jet, killing all 176 passengers on board.