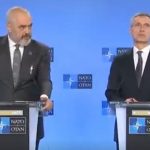 On Wednesday Albanian Prime Minister Edi Rama reaffirmed his country’s commitment to providing refuge for members of the MEK Iran. Rama made the announcement during a joint press conference with Jens Stoltenberg, the Secretary-General of the North Atlantic Treaty Organization (NATO) in Brussels.

Albanian Prime Minister Edi Rama ensured on Wednesday that #Albania will not change its approach to the People's Mojahedin Organization of #Iran, saying their sheltering has been provided as a humanitarian operation.#MEK pic.twitter.com/76kTBgxvx7

The announcement came in the wake of Albania’s recent expulsion of two Iranian regime diplomats from the country for “activity incompatible with their diplomatic status.” Although the Albanian government did not specify the exact nature of the undiplomatic behavior, the phrase used to justify their removal has been used previously in cases of espionage.

The expelled diplomats, identified as Mohammad Ali Arz Peimanemati and Seyed Ahmad Hosseini Alast, were the third and fourth regime operatives to have been expelled from Albania in just over a year. In December 2018 regime’s ambassador, Gholamhossein Mohammad Nia and Ministry of Intelligence (MOIS) agent Mostafa Roudaki were thrown out of the country for their involvement in a terrorist plot targeting the MEK Iran.

President Rama restated Albania’s tradition of providing refuge to those who are in danger, saying,

“Albania has accepted to give shelter to several thousands of people, the lives of whom have been threatened by the regime of Tehran. It is part of what we are, of our tradition. We have also done this thing as a humanitarian operation. We will not change our tradition and approach towards these people. As for the wrongdoing activities in Albania, we have expelled the diplomats and other people that are outside the regular activity of the diplomatic part.”

He also noted Albania’s strong ties to the United States in his statement, stating that the U.S. and Albania had negotiated a joint humanitarian agreement to provide refuge to the MEK Iran and that it was proud to honor its commitment to a longtime NATO ally.

The MEK Iran resettled in Albania after repeated attacks by Iranian regime proxies in Iraq. The group was initially headquartered at Camp Ashraf in Iraq, where they had built a functioning city. The MEK was forced to relocate to Camp Liberty in 2009 after U.S. troops withdrew from the country and transferred the responsibility for securing the safety of MEK Iran members to Iraq.

The new Iraqi Prime Minister was closely affiliated with the Iranian regime and used the opportunity to launch attacks on Camp Liberty and prevent shipments of food and medical supplies from reaching the camp. After a series of deadly attacks on Camp Liberty and a sustained effort from a coalition of international dignitaries led by Mrs. Maryam Rajavi, President-elect of the National Council of Resistance of Iran (NCRI), the United States brokered a humanitarian deal with Albania to accept 3,000 refugees from Camp Liberty.

Since the MEK’s relocation to Albania, Iranian regime agents have continued to plot attacks against the MEK Iran. Regime terrorists attempted to bomb a Nowruz (Persian New Year) celebration in 2018, leading to the expulsion of a regime ambassador and an MOIS agent. The Albanian government has remained firm in its commitment to the MEK Iran and has actively worked to combat the regime’s terrorist operations within its borders.