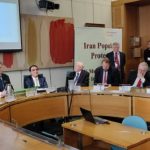 Written by Amineh Qaraee on January 23, 2020. Posted in NEWS

The UK cross-party Parliamentary conference in the House of Commons in support of Iran Protests and democratic change in Iran. The President-elect of the Iranian opposition, Mrs. Maryam Rajavi, addressed the meeting via video- January 21, 2020

Speakers from both houses emphasized that the anti-government protests in Iran beginning in December 2017 demonstrate the Iranian people’s dissatisfaction with the clerical regime and their desire for a free and democratic Iran. The MPs also voiced their strong support for the ongoing protests taking place throughout Iran despite the brutal acts of suppression by the regime’s security forces.

President-elect of the National Council of Resistance of Iran (NCRI) Mrs. Maryam Rajavi delivered a video message to the conference as well. She said: “I thank you for supporting the uprising of the people of Iran by urging your government to adopt a decisive policy against the Iranian regime and to recognize the right of the Iranian people to resistance. The Iran uprising will not be stopped. The struggle of the people of Iran, the resistance units, and rebellious youth will continue to end the religious fascism.

The Iranian Resistance seeks to establish a republic based on people’s free choice and vote, separation of religion and state, pluralism, gender equality, and abolition of the death penalty. #IranRegimeChange #FreeIran2020 #Iran pic.twitter.com/oeDOBuo2wD

“We are at a sensitive moment in the history of the people of Iran. The Iranian Resistance seeks to establish a republic based on people’s free choice and vote, separation of religion and state, pluralism, gender equality, and the abolition of the death penalty,”  she continued.

Mrs. Rajavi referenced the downing of a Ukrainian passenger plane by two IRGC missiles, killing all 176 people on board, saying: “This is a horrific crime which caused outrage in Iran and around the world. The people of Iran will neither forgive nor forget. Khamenei, Rouhani and commanders of the Revolutionary Guards must be brought to justice.”

Recognize the Democratic Aspirations of the Iranian People

The MPs described the need to support Iranian people and their right to a democratic future. “U.K. Government should stand with the Iranian people and the NCRI, recognizing their democratic aspirations and their right to change the regime for a better future,” said Rt Hon David Jones MP, former Secretary of State for Wales, while also acknowledging the role of the MEK and MEK Resistance Units in organizing the recent protests in Iran. He also called for the release of all political prisoners, dual citizens, and those arrested in the recent uprisings.

MPs and Peers in a cross-party conference call on the UK Government to support #IranProtests & stand with the #Iran people and their just Resistance Movement led by Mrs. @Maryam_Rajavi for a #FreeIran2020 @BorisJohnson @foreignoffice @DominicRaabhttps://t.co/JPc5b4grHB pic.twitter.com/gSTnIzahc6

Today conference on #IranProtests2020 with MPs & Peers from all major parties and both Houses of Parliament supporting the call by @Maryam_Rajavi president-elect of NCRI urging the UK gov to adopt a decisive policy on #Iran+recognise the right of the Iranian people to resistance pic.twitter.com/LZLBBBZRFB

Prof. Lord Alton of Liverpool discussed the human rights violations perpetrated by the regime, saying: “U.K. Government must work with allies at the U.N. to hold the regime and its leaders to account for their atrocities including the killing of protesters and the brutal crackdown on the recent popular uprisings as well as the 1988 massacre of 30,000 political prisoners in Iran’s prisons by referring them to an international tribunal.”  Most of the 30,000 political prisoners killed during the summer of 1988 were MEK members or supporters. None of the perpetrators of this crime against humanity have ever been brought to justice.

MP Steve McCabe echoed Mrs. Rajavi’s call to the U.N. Security Council to send a fact-finding mission to Iran to investigate the deaths of protesters and determine the status of those arrested during the protests.

“We expect the U.K. Government to urgently take the necessary actions, as a permanent member of the U.N. Security Council, to secure this fact-finding mission,” he said.

MP Dr. Matthew Offord, chairman of the conference, called for a firm policy toward the Iranian regime, stating: “Our Government must work with the EU to proscribe the IRGC and Iran’s Intelligence Ministry as terrorist organizations in their entirety in order to deny the regime resources and funds it will use to suppress protesters and export terrorism.”

@DavidJonesMP:
Khamenei noted important role by Iran opposition in #IranProtests & activities of +1000 units of #PMOI throughout #Iran
UK should work with Intl allies 2 expel IRGC & it's proxy militias from ME & must proscribe IRGC & MOIS as terrorist Organizations.@DominicRaab pic.twitter.com/JRz6EHzc0I

The MPs applauded recent actions taken by the U.K., such as proscribing Hezbollah as a terrorist group and partnering with France and Germany to trigger the Dispute Resolution Mechanism under the JCPOA, or Iran nuclear deal. The conference attendees stressed that while these actions were positive steps, the U.K. needs to do more as part of a firm policy toward Iran. They argued in favor of prescribing the IRGC as a foreign terrorist organization and working with international allies to reinstate the six resolutions created by the U.N. Security Council on the Iranian regime’s nuclear program.