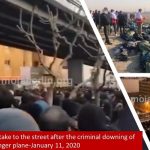 Written by Esmail Mohades on January 19, 2020. Posted in NEWS

The university students poured to the streets of Tehran and dozens of other cities after the Iranian regime admitted it had shot down the Ukrainian passenger plane killing 176 people-January 11, 2020

The mid-November uprising turned on Tehran once again. This time, however, the spark that ignited the powder-keg was the downing of a Ukrainian passenger plane in the sky of the Iranian capital city, which resulted in the death of 176 innocent people.

Reports published by the Mujahedin-e Khalq (MEK) following the downing of the airplane by the IRGC, students of Amir Kabir and other universities joined by thousands of people showed their outrage against the regime, whose only products so far have been death and hatred. The flame of anger soon spread to several other cities, such as Isfahan, Shiraz, Babol, Lahijan, Hamedan, and Mashhad.

Avant-garde students, leaders in the uprising

MEK reports clearly showed that this time, the leaders of the protests, first in Tehran and then in the rest of cities, were the students. They targeted the supreme leader from the very beginning of the demonstrations. Footages of the protests published by MEK sourced inside Iran show the slogans were focused on Ali Khamenei’s dictatorship. The protesters chanted “Death to the dictator” or “Commander-in-Chief, resignation, resignation”, demanding the end of the supreme leader of Iran’s mandate.

The Iranian people started the anti-dictatorship movement early in 1980, surpassing the massacre of 30,000 political prisoners in 1988 (mainly MEK members and supporters), the uprising of the students in 1999, as well as the popular protests after the presidential election fraud in 2009, the uprising of December 2017 and the recent events of November 2019.

This time, the main target was Khamenei as the religious dictator and, what made it unquestionable was that all the arguments and claims that led to the protests in previous years still remained valid, and some were even stronger.

More than two-thirds of people in the rich country of Iran are under the poverty line. Unemployment is growing among young people and particularly among university graduates. This whole situation led, in the last years, to the formation of an army of hungry and unemployed people.

All this was boosed by the suppression of fundamental freedoms. The repression of women and the mandatory use of the veil, the reign of medieval dogmas and the oppression of the youngest, who has implored a modern society, still remain active. All these arguments and motives of struggle helped to shape the anti-dictatorship movement which today has become unstoppable.

Moreover, the blood of 1,500 people unfairly spilled in the hands of the religious dictator during the November Iran protests that spread to 191 cities across Iran, has guaranteed the continuation of the uprising. This was clearly evidenced when in the last weeks, a group of students took the streets under the shout “1,500 people were killed in November!”. The litigation for the individuals who lost their lives in the attack of the Ukrainian flight was added to the litigation for the mid-November uprising victims.

Major features of the January uprising

The seventh uprising held this month has its best illustration in the slogans. In addition to focusing on medieval religious fascism and in Khamenei himself, they also emphasized the main arm of the regime’s suppression and export of terrorism through the Revolutionary Guards (IRGC). Besides being responsible for the massacre of 1,500 people in November, this organ is the main cause of the Ukranian plane shot down. “IRGC! Have shame and leave this country”, shouted the students last week, together with “The IRGC does the murder, the leader supports it!”, and so on.

January 12 – Tehran, #Iran
"Khamenei, shame on you! Let go of the country!" the crowd chants as their protests target the mullahs' regime and the dictator himself.#IranProtestspic.twitter.com/jporhN4m9L

After the death of the IRGC chieftain Qassem Soleimani, the supreme leader used type of deceptive publicity and dissemination of information on the front pages of newspapers to portray Soleimani as a “national hero” and a beloved one, forcing government staff, military, school & university students and staff, etc. to go to his funeral. Instead of that, people demonstrated how much they hated this man by publicly setting his banners and posters on fire. “Soleimani was a murderer, his leader is also a murderer!”, they shouted as a response to all the regime propaganda and demagogism.