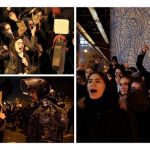 MEK Iran: The Indispensable Role of Women in Recent Protests

Written by Amineh Qaraee on January 17, 2020. Posted in NEWS

The main opposition to the Iranian regime, the Mujahedin-e Khalq (PMOI/MEK Iran) has been working hard on behalf of the people of Iran to ensure that the course in which the country is heading changes drastically. The MEK Iran has a massive following in Iran because it is working towards the principles of democracy, human rights, freedom, equality, the separation of religion and state, and peace. This could not be any further from the reality that the people are currently dealing with.

The role of women in the recent protests has been extremely encouraging. Women in Iran, under the rule of the mullahs, are treated as second-class citizens and have been repressed in many areas of their life. However, they are refusing to be silenced by the regime. In its quest for equality, the MEK Iran has viewed the role of women as essential. For example, the President-elect of the National Council of Resistance of Iran (NCRI), Mrs. Maryam Rajavi, is a woman.

Three brave rebellious girls tearing down a large poster of terror master Qassem Soleimani in Iran only hours after the state-orchestrated funeral circus ends. They tear down both posters while working as a cohesive team. Indeed much hope for #FreeIran2020. Here is the 1st one. pic.twitter.com/zlFMWQk1ok

The participation of women in protests is increasing. Mid-November last year, the people of Iran instigated an uprising, with the participation of the MEK Iran and the Resistance Units that are located the whole way across the country. The regime responded with great force, even cutting internet access to the people. However, thanks to MEK Iran, we were able to get some accurate information regarding the events as they unfolded.

Defiant youth all over the country have been torching photos and images of #QassemSoleimani and Ali Khamenei #Iran #IranProtests #FreeIran @USAdarFarsi pic.twitter.com/IvMVMuHR3Y

From the many images and substantial footage that was shared, the participation of women was significant. The women were out in the streets, calling out for regime change and denouncing the mullahs for their corruption, mismanagement, and brutality. Not only were women participating in the protests, but they were also leading them.

With regards to the recent protests by students, young women are once again at the forefront of the action. They are bravely risking arrest, imprisonment and even the death penalty in order to voice their support for MEK Iran and to make their opposition to the regime known.

In the videos that have been circulating social media, women have been standing up to the brutal, cruel and callous forces that the regime has sent out to silence them.

The MEK Iran estimates that upwards of 400 women have been killed by the repressive security forces in the past few months. Many more have been arrested.

The Iranian regime has even acknowledged the presence of women during the recent protests. The country’s Minister of Interior specifically said that women have a “special role” in leading the recent unrest, describing their presence as “remarkable”.

Mrs. Rajavi has applauded MEK Iran Resistance Units, the women of Iran, the students and the rebellious youth for their role in the recent uprising. She encourages the people to continue pressuring the regime and has called on the international community to back the people in their legitimate demands for freedom, democracy and the respect of human rights.