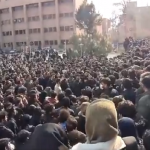 MEK Iran: People Continue to Rise up While Repression Increases

Written by Amineh Qaraee on January 13, 2020. Posted in NEWS 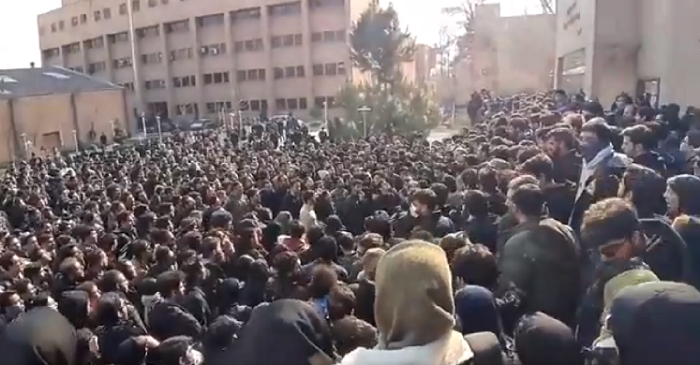 Students in a protest gathering against the downing of the Ukrainian airplane by the IRGC, Tehran, Iran.

Faced with the recent destabilizing incidents that have involved Iran in the past few weeks, people across the country are taking to the streets to be heard. Students, in particular, have been active in the protests, as they always have been in the country.

At the beginning of the month, the United States launched a drone attack that killed the regime’s top terrorist – Qasem Soleimani, commander of the Quds Force branch of the Islamic Revolutionary Guard Corps (IRGC). Iranian officials were deeply affected by this killing because the Quds Force commander has played such a big role in the country’s leadership. Soleimani influenced foreign policy more than any foreign minister and he expanded the regime’s influence across the region.

The regime tried to play the victim card and it worked to a certain extent, with many denouncing US President Donald Trump’s decision to target a foreign official in a third country. However, any appeasement in this regard was short-lived when it became clear that Iran was responsible for the 176 passengers and crew that were killed on Ukrainian International Airlines flight PS752 that was traveling from Tehran to Kiev.

Shortly after take-off, the flight crashed and all on-board died. Iranian aviation authorities initially said that there was nothing criminal about the crash – it was technical issues that caused the plane to fail. However, suspicions were high from the very beginning, with many countries suspecting that the Iranian regime played a role. Indeed, not long later, the IRGC admitted that it had accidentally shot the plane down, thinking it was an American cruise missile.

The people of Iran are saddened and extremely angry that there are even more innocent victims of this brutal regime.

Students across the country gathered outside university buildings where they protested and held anti-government demonstrations. The security presence there was heavy as the regime anticipated dissent, but it did not stop many from making their voices heard. Students at the National Beheshti University highlighted the IRGC’s incompetence and its role in “killing the nation”. They also chanted “Cannons, tanks, and teargas are no longer effective”, pushing their resilience and bravery to the forefront.

Students at the Allameh University in the country’s capital paid tribute to the many martyrs that have already died during this resistance movement, vowing not to give in to the regime’s demands or threats. They were heard chanting: “We did not give martyrs to compromise and praise the murderous leader.”

On January 11, 2020, thousands of students in Tehran protested over the #IRGC missile attack at the Ukrainian Airliner killing 176 people on board.https://t.co/ECpe99M8Y1#Iran #IranProtests @USAdarFarsi pic.twitter.com/CoTN9QcX1O

Maryam Rajavi, President-elect of the National Council of Resistance of Iran (NCRI), commended the students across the country for taking matters into their own hands and making the world understand they the people do not accept the murderous rule of the mullahs.