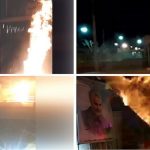 Written by Mohsen Aboutalebi on January 10, 2020. Posted in NEWS 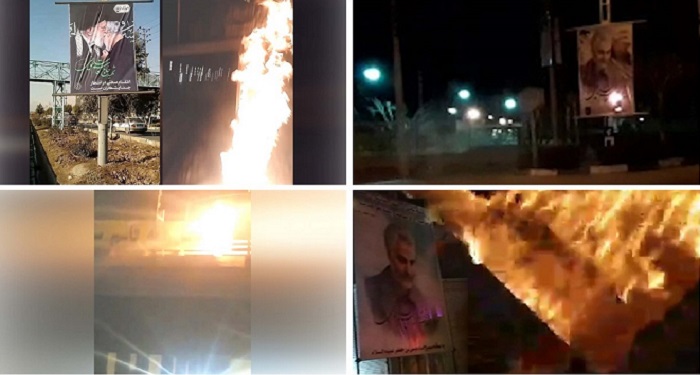 Defiant youth torched Soleimani’s posters in Tehran and other cities, January 7- IranQassem Soleimani, leader of the notorious Quds Force, a branch of  Islamic Revolutionary Guard Corps (IRGC), was killed during the recent drone strike by the United States. The Iranian regime has seen this as a major blow considering Soleimani’s key role in furthering Iran’s agenda across the region.

He was the symbol of the Iranian regime’s terrorism, fundamentalism, and extremism. He has been heavily involved with many atrocities over the past few decades – the suppression of the main opposition Mujahedin-e Khalq (PMOI / MEK Iran) in Camp Liberty and Camp Ashraf in Iraq in which dozens of dissidents were killed, the atrocious and horrifying chemical attacks in Syria and, most recently, the suppression of protesters in Iraq, to name just a few.

The Iranian regime’s propaganda has tried to portray the loss of Soleimani as a blow to the people of Iran as well as to the country’s leadership. The regime has tried to make the rest of the world believe that the ordinary people of Iran idolized Soleimani. However, this could not be further from the truth and one look at social media tells a different story.

The People’s Mojahedin Organization of Iran (PMOI / MEK) has so-called “Resistance Units” the whole way across the country. During the recent uprising, they were instrumental in bringing light to the real situation in the country. Once again, they are fighting against the regime’s lies and ensuring that it is known that Soleimani is not the national hero that the regime is trying to portray.

Members of the Resistance Units of the MEK Iran are bravely engaging in efforts to make it clear that they will not be silenced. For example, in Tehran and other major cities, members are putting up banners and photos of the leaders of the Resistance Massoud Rajavi and of the president-elect of the National Council of Resistance of Iran (NCRI) Maryam Rajavi. Text on the posters affirms that the Resistance movement and the people of Iran are intent on overthrowing the regime.

The Resistance Units are also handing our flyers in several cities with a message from Massoud Rajavi in which he calls on the regime’s forces to surrender.

The young people of Iran have, as always, been playing their part in these times of uncertainty. Angry young people had been setting fire to the banners celebrating the life of Qassem Soleimani. In the city of Karaj, the young people set fire to the entrance of a Basij base in protest to the planned visit of Ebrahim Raisi – the country’s chief justice who was a major player in the 1988 massacre in which more than 30,000 political prisoners mainly the members of the MEK Iran were executed.