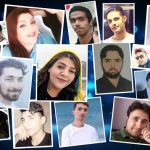 Written by Amineh Qaraee on December 31, 2019. Posted in NEWS

Reuters reported over 1500 have been killed, including 27 children, during Iran protests started mid-November.

Ali Khamenei ordered a deadly crackdown on #IranProtests in order to save his regime from collapsing. This resulted in over 1500 martyrs, 4,000 injured &12,000 arrests. In addition, to conceal its crimes against humanity, the Iranian regime imposed an internet blackout. pic.twitter.com/kgaOwJP5P0

The religious fascism ruling Iran fears international and domestic consequences of a crime against humanity committed during the nationwide protests. The Iranian regime is continuing its efforts to cover the concrete number of martyrs, wounded or arrested.

According to the network of MEK Iran from inside of the country, the regime’s interrogators and torturers have transferred many of the wounded before recovery from hospitals to prison and put them under torture.

MEK Iran added that “many of the detainees, including those in Shiraz, are being pressured to take part in televised “confessions” and speak out against the uprising and the Iranian Resistance.”

“The detainees are in the age range of 18 to 30 years old. There are also many detainees under 18 years of age, and most are 13 to 15 years old,” said Helale Mousavian one of the regime’s Judiciary lawyers, who observed the condition of the detainees and their families in an interview with the state-run daily Etemad on December 28, 2019.

The President-elect of the National Council of Resistance of Iran, Mrs. Maryam Rajavi has repeatedly called on the United Nation to “urgently send an international fact-finding mission to the prisons to meet with the detainees.

Saturday, December 28 mark the 40th day memorial of the massacre of more than 1,500 Iranian protesters during November Iran protests by regime’s security forces.

Also, on Monday December 30, MEK Iran reported that “in the early morning hours of December 30, 2019, defiant youth attacked the IRGC’s Khatam al-Anbiya Construction HQ despite regime forces being on full alert in fear of a new nationwide uprising.”

Iran’s main opposition movement the MEK Iran announced that “Khamenei’s IRGC, acting as the godfather of its Iraqi terrorist proxies Kata’ib Hezbollah, boast about “the right to take revenge and respond and the mullahs’ regime has recently killed 1,500 Iranians, including minors, and arrested 12,000 others.”

Names of 14 more martyrs of the November nationwide uprising in Iran are as follow: