Written by Esmail Mohades on December 30, 2019. Posted in NEWS 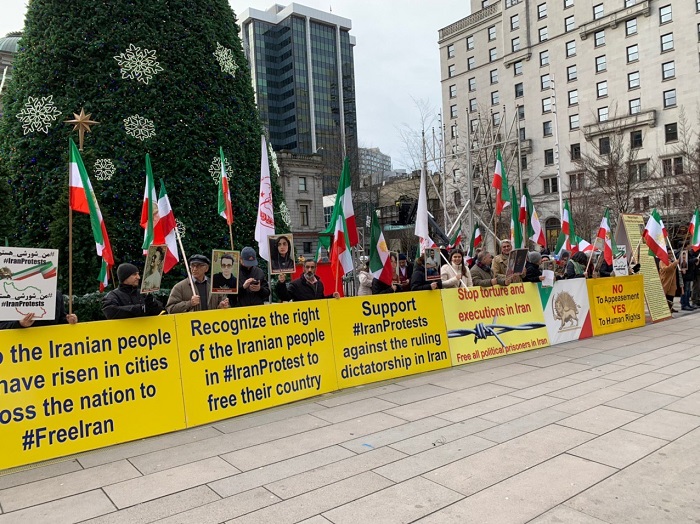 MEK Iran supporters showed their solidarity with Iranian protesters and 1,500 fallen martyrs were slain by regime forces during November 2019 protests.

Saturday, December 28 mark the 40th day memorial of the massacre of more than 1,500 Iranian protesters during November Iran protests by regime’s security forces.

Roger Lyon the fr.chairman of the MSF Trade Union &a member of the British Labor Party spoke at #MEK’s rally. Mr. Roger expressing his support for the popular uprising in Iran, said, “The intl community should not be silent about this crime”.#IranProtests #Internet4Iran pic.twitter.com/Ulq3TruB4I

The rallies were attended by hundreds of MEK Iran supporters and sympathizers of the Iranian opposition, the  National Council of Resistance of Iran (NCRI).

Meanwhile, members of the MEK Iran Resistance Units are expanding their campaign to many cities.

The banners put up by MEK Iran supporters in Iran read in part, “Khamenei, Rouhani must face justice for committing Crimes AgainstHumanity,” “Death to Khamenei, hail to Rajavi,” “The blood of martyrs has blossomed into flowers,” “Hail to the proud martyrs of the Iranian people’s uprising.”

MEK Iran Resistance Units are literally risking their lives as support for MEK Iran in the country is punished by death.

State-run Siasat daily by calling #IranProtests “anarchy” and “sedition”acknowledged that the #protests were organized &it will continue.The protest itself is not the only phenomenon that frightens the regime, but the new young Iranian generation, that seeks #IranRegimeChange pic.twitter.com/VG4qsgWKXe

On Sunday, December 29, 2019, The Mujahedin-e Khalq (PMOI/MEK Iran) released the names of 14 more martyrs of the Iranian people’s nationwide uprising in November, bringing to 615 the number of those identified so far.

The Iranian Regime fears international and domestic consequences of committing crimes against humanity and is continuing its efforts to conceal the actual number of the martyrs, the wounded and those arrested.

Iranians traditionally mourn their dead 40 days after their passing. The Iranian regime was desperate to prevent any and all memorial ceremonies planned for the protesters killed by its forces during the Iran November nationwide protests.