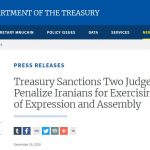 MEK Iran- US Secretary of State: The United States will stand with the Iranian people

Written by Mohsen Aboutalebi on December 22, 2019. Posted in NEWS 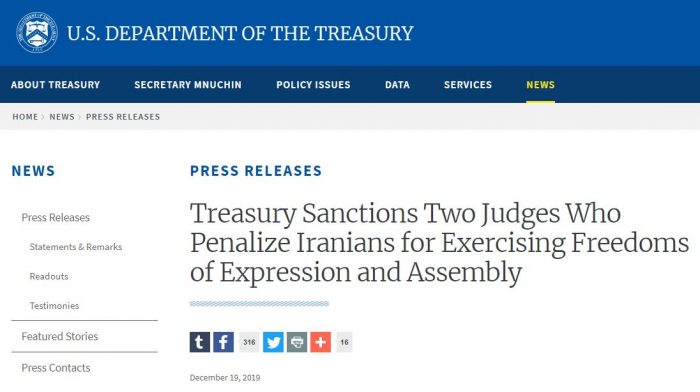 The US Secretary of State expressed support for Iran Protests

Following the designation of two Iranian regime’s ‘judges’ on Thursday, Mike Pompeo, the US Secretary of State said the US will stand with the Iranian people.

“The United States will stand and has stood under President Trump with the Iranian people. Our public support, our moral support is important.  Our calls for justice matter.” Pompeo said at the State Department on December 19, 2019, adding:

“The protest that started and accelerated in November clearly signaled that the Iranian people have just had enough.  They’re fed up. They’re fed up with the regime’s economic failures… Think of the thousands – you all know them – think of the thousands of Iranians executed in prison following protests in 1988, the students that were slaughtered in the protests in 1999… and then think of the protest in 2009… It’s the same story today. The regime has killed hundreds and hundreds of protesters since mid-November, possibly more than 1,000… The regime cut off the internet, a basic communication tool, to try and stop the world to see the horrors that were taking place inside of their country,“

Secretary Pompeo also announced that the US has designated two Iranian regime Judges.

The US Treasury designated #Iranian "hanging" judges, Mohammad Moghisseh &Abolghassem Salavati for "failing to observe justice during their years as judges". These two "judges" have sentenced dozens of dissidents to death. https://t.co/uM6KBTSBj0 pic.twitter.com/KT1S54zmsz

“Under the Immigration and Nationality Act, we are restricting visas for current or former Iranian officials and individuals responsible for or complicit in the abuse, detention, or killing of peaceful protesters, or for inhibiting their rights to freedom of expression or assembly.”

“Our action will also restrict visas for these individuals’ family members.  The materials that are being provided to us by citizens from all across Iran will be invaluable in us using this new authority to put true pressure and to hold accountable those who are denying freedom and justice to the people of Iran.”

“Thugs killing people’s children will not be allowed to send their own children to study in the United States of America.”

“But no matter what, I tell the Iranian people what I have said for many months and I will continue to say so long as it is required to be said: America hears you. America supports you. America stands with you,” he added.

On the same day, the US Treasury released a press statement concerning the designation of two Judges.

“Today, the Department of the Treasury’s Office of Foreign Assets Control (OFAC) designated two judges presiding over branches of the Iranian regime’s Revolutionary Court who, for years, have punished Iranian citizens and dual-nationals for exercising their freedoms of expression or assembly.  In many cases, these judges sentenced political prisoners to death. Through their respective branches of the Revolutionary Courts, Abolghassem Salavati and Mohammad Moghisseh, both designated today, oversaw the Iranian regime’s miscarriage of justice in show trials in which journalists, attorneys, political activists, and members of Iran’s ethnic and religious minority groups were penalized for exercising their freedom of expression and assembly and sentenced to lengthy prison terms, lashes, and even execution.” The US Treasury press statement reads.

“The United States will not be a bystander to ongoing oppression and injustice in Iran.  This Administration is targeting those in the regime who seek to censor protestors, persecute religious minorities, and silence the Iranian people,” said Secretary Steven T. Mnuchin.  “The United States stands with those who participate in peaceful public dissent and protests.”

Mohammad Moghisseh was a member of the “Death Commission” during the 1988 massacre of 30,000 political prisoners, mainly members and supporters of the MEK.