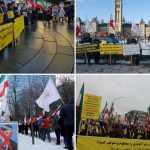 Written by Esmail Mohades on December 10, 2019. Posted in NEWS 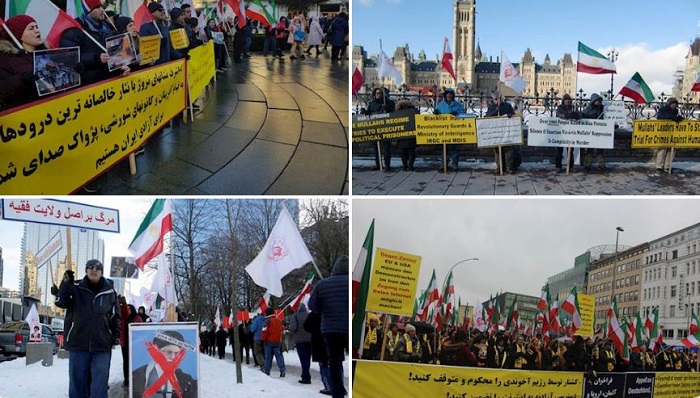 Protests continue in cities scattered across Iran despite the regime’s brutal crackdown on protesters. Meanwhile, the rest of the world is weighing in on the situation, and the regime is facing strong condemnation for their murderous activities.

Rallies in Support of Protesters

On Saturday, December 7th, MEK supporters in Stockholm, Sweden held a rally to express solidarity with the Iranian people’s uprising and continuing protests. Demonstrators gathered in spite of the cold weather to express their support for the Iranian people’s struggle for freedom from the clerical regime and to condemn the brutal crackdown on protesters that has cost the lives of over 1,000 protesters, according to Mujahedin-e Khalq (PMOI/MEK) sources. Speakers called on the international community to hold regime leaders responsible for these crimes against humanity, and speakers and demonstrators echoed National Council of Resistance of Iran (NCRI) President-elect Maryam Rajavi’s call on the United Nations to send a fact-finding team to Iran to determine the full extent of the regime’s crimes during the uprising.

Iranians across the globe, PMOI/MEK supporters are voicing solidarity with #IranProtests.#Iranhttps://t.co/xFLMUbgWWv

MEK supporters also held rallies on Saturday in the cities of Sydney, Melbourne, and Canberra, Australia in solidarity with the Iranian people’s November uprising and ongoing anti-regime protests. The demonstrators condemned the regime’s murders, arrests, and torture of protesters.

Additional rallies have also been held by MEK supporters in Oslo, Norway; Ottawa and Toronto, Canada; and Hamburg, Germany.

On Sunday, Joseph Borrell, the High Representative of the European Union for Foreign Affairs and Security Policy, issued a statement condemning the Iranian regime for “the widespread and disproportionate use of force against nonviolent protesters.” Borrell said that such conduct was “unacceptable” to the E.U. and its Member States.

The Portuguese Parliament adopted a resolution expressing concern about the Iranian regime’s crackdown and “illegal killings” of protesters. The resolution was adopted with the support of the Socialists, Socialist Democrats, the Lefts, the Popular Party, the Nature Party, and others and received a near-unanimous vote.

Titled “For those killed in demonstrations in Iran,” the resolution reads in part:

“The recent events in Iran is a concerning example of illegal killings by the Iranian regime’s security forces where they used excessive forces in their intense crackdown of recent protests… The report also show live bullets fired from rooftops and from a helicopter in one case. Based on these reports, the Portuguese Republic Parliament expresses its concerns over the deaths of protesters killed in recent weeks and calls for an end to the regime’s crackdown.”

Danish Foreign Minister Jeppe Koford spoke strongly against the regime’s crackdown on protesters, saying: “The European Union has a common opinion with a clear criticism of Iranian authorities’ unacceptable use of force against protesters. Denmark has worked for a clear and unambiguous joint opinion. It has succeeded. Freedom of speech and assembly must be respected.”

The fate of the imprisoned protesters is uncertain. The regime uses torture as a means to coerce confessions, and the mullahs did not refrain from shooting citizens in the middle of the street. These 12,000 people are in immediate danger.