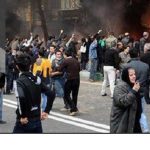 MEK: Mullahs in Iran Are Fearful of Continuation of the Protests

Despite the most brutal crackdown on the protesters in Iran, the latest popular protests have managed to continue. On the second day of the protests, the regime shut down the internet to keep the world unaware and suppress the uprising. As the regime was forced to restore part of the internet, new information and videos of the protests came out of the country. The videos posted on the internet showed how the security forces crackdown on the protesters. At the same time, videos showed the extent of the uprising and how the Iranian youth are determined to change the regime.

In addition to the information coming out of the country through the internet, the official remarks of regime’s officials also indicate that the uprising is far from over and regime officials are very concern about the continuation of the unrest.

On December 8, 2019, the State-run Siasat daily had a piece concerning the protests. By calling the protest “anarchy” and “sedition” the piece acknowledged that the protests were organized and it will continue.

“It seems that the November 2019 sedition was phase one of the anarchy and it is very possible that phase two will take place in one of the upcoming events.” The piece reads adding:

“Despite the fact that the intelligence apparatuses arrested a number of groups of rioters and thugs, but these groups, due to their capacity which was demonstrated in the sedition in November, have a strong and secret organization which must be destroyed…they were very professional and trained…”

The protests are so widespread that even the state-run news outlets are compelled to broadcast a small part of such news.

On December 7, 2019, Ezatolah Zargami, the supreme leader’s representative and former head of the state-run radio and television visited Yasouj University. A student questioned Zargami, the factions inside the regime, and the state-run TV and radio.

Despite the clerical regime’s suppressive measures, including the stationing of intelligence, security and plainclothes agents around Tehran and Polytechnic universities, today a large number of students marked December 7, Student Day#Iran #IranProtest pic.twitter.com/FDZv9V8TpC

“Most people don’t listen to the jargon of your TV and Radio and follow the daily news from foreign news agencies…I am telling you and your hardliner and reformer colleagues, loud and clear, that the game is over, listen to the cry of people in the streets, they are saying that they don’t want you reformers and hardliners…” the student in Yasouj University said, referring to the demands of the people in the protests which were calling for regime change.

At the same time, university students all across the country staged protests on the campuses and express their solidarity with the protesters. On December 7 in commemoration of Student Day, the large number of students staged protests against the regime. The slogans of the students reflected their determination to challenge the regime and support and continue the uprising. The students were chanting, “Suppression is not the end of the line, struggle brings liberation,” “prison, guns and batons, we won’t stay quiet,” “I will kill whoever killed my brother,” “my martyred brother, your path will continue.” and “people fed up with oppression, are standing together,”