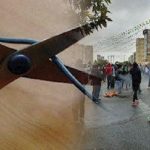 Written by Mohsen Aboutalebi on November 23, 2019. Posted in NEWS

Following widespread protests across Iran and shut down of internet by the regime to create an information blackout to stop the flow of information and brutal crackdown, on November 22 the U.S. Department of the Treasury, designated Mohammad Javad Azari Jahromi, Iranian regime’s Minister of Information and Communications Technology for his role in the Iranian regime’s widescale internet censorship.

“Internet access in Iran, managed by Azari Jahromi’s ministry, was blocked for several days in November based upon what Iranian authorities describe as national security concerns in the wake of anti-regime protests throughout the country.  The recent internet blocking follows similar patterns that occurred in 2017 and 2018.  Azari Jahromi, who is a former employee of Iran’s notorious Ministry of Intelligence, has advanced the Iranian regime’s policy of repressive internet censorship since he took office in mid-2017 and has also been involved in surveillance against opposition activists.” Department of the Treasury’s statement said in part.

“Iran’s leaders know that a free and open internet exposes their illegitimacy, so they seek to censor internet access to quell anti-regime protests,” said Treasury Secretary Steven Mnuchin. “We are sanctioning Iran’s Minister of Information and Communications Technology for restricting internet access, including popular messaging applications that help tens of millions of Iranians stay connected to each other and the outside world”

“The U.S. is sanctioning the Minister of Information and Communications Technology, Mohammad Jahromi, for helping shut down the Iranian internet. We will hold members of the Iranian regime accountable for their violent repression of the Iranian people” Mike Pompeo the US Secretary of State tweeted on November 22, 2019.

Following the shutdown of the internet, many senior regime officials and commanders of security forces published threatening statements signaling for a bloody crackdown on the protesters and the organizers of the protests.

“Every single rioter, where ever they might be in Iran, would be identified and punished for their acts.” Ali Shamkhani, Secretary of the regime’s Supreme National Security Council, said in an interview with Mehr news agency on November 21, 2019.

“Those rioters, and their masters … should know that harsh punishment is waiting for them…” Ebrahim Raisi, Head of regime’s Judiciary and a member of the “death commission” of the 1988 massacre said on November 22, 2019.

Just less than three weeks ago the U.S. Department of the Treasury designated Ebrahim Raisi.

In 1988, Ruhollah Khomeini, then-supreme leader of the Iranian regime, issued a fatwa (religious decree) to purge Iran of political prisoners. In the span of a few months, Iranian authorities executed over 30,000 political prisoners, mostly members, and supporters of the People’s Mojahedin Organization of Iran (PMOI/MEK).

In another new threat related to the 1988 massacre of MEK political prisoners, Hesameddin Ashena, advisor to regime’s president, described the recent nationwide uprising as “Eternal Light operation No. 2”.

The Secretariat of the National Council of Resistance of Iran (NCRI) released a statement in this regard.

“Hesameddin Ashena, head of the office of Strategic Assessments, Hassan Rouhani’s advisor, and a former Deputy in the notorious Ministry of Intelligence and Security (MOIS), described the nationwide uprising as “Eternal Light operation No. 2”. He wrote, “They thought they have started Eternal Light Operation No. 2.” But, “In reality, Operation Mersad No. 2 has started.”

As such, on the one hand, Ashena displayed the regime’s fear of being overthrown by the uprising, and on the other hand threatened the people with violent suppression, similar to what the murderous regime perpetrated in 1988 in Kermanshah Province, meaning mass and arbitrary arrests, indiscriminate firing into the crowd, and mass public executions.” The statement reads in part adding:

“During Eternal Operation in July 1998, the National Liberation Army of Iran advanced 170kms into Iranian territory to the gates of Kermanshah and liberated large parts of the country.

The criminal mullah, Ali Razini, a senior Judiciary official said in an interview dated, July 29, 2019, based on Khomeini’s fatwa, those members of the Mujahedin-e Khalq (PMOI/MEK), who had been captured during the Eternal Operation were dealt with in “Court Martials” on the field. They were tried in the war zones and punished there… It had no proceedings. Sometimes, the trial would last an hour or less… Three people were sentenced to death… There was a half-built building in a T-junction in the town of Islam-Abad. We said we will carry out the verdict there… they were hanged.”