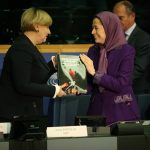 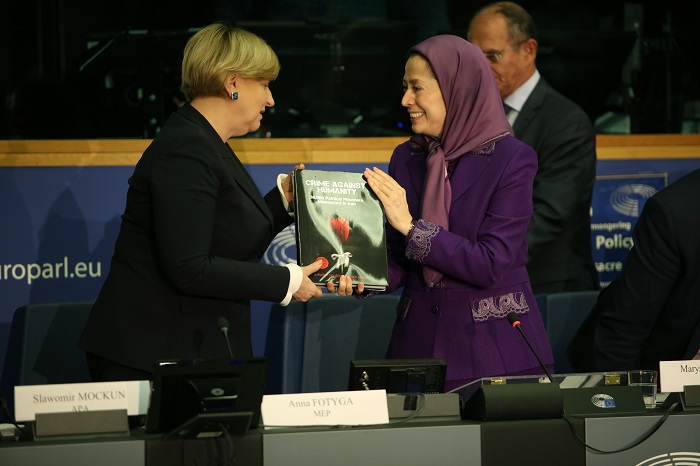 Maryam Rajavi’s speech at the Parliament of Europe – Presentation of the book on the 1988 massacre of political prisoners in Iran- October 23, 2019

A new book was released on Wednesday detailing some of the Iranian regime’s violations of human rights. The book entitled “Crime Against Humanity” lists the names of more than 5,000 people that were killed by the Iranian regime during the 1988 massacre in which 30,000 political prisoners, mainly the MEK members and supporters, that has been widely described as a crime against humanity.

During the 1988 massacre, so-called “death commissions” were set up across the country to carry out the orders of the Supreme Leader at that time. Ayatollah Khomeini had issued a fatwa ordering the execution of political prisoners in Iran.

During the massacre, more than 30,000 political prisoners were killed; many of them members or supporters of the Mujahedin-e Khalq, or MEK. Prisoners were executed in large groups and their bodies were dumped in mass and unmarked graves. Families of the victims, to this day, do not know where the remains of their loved ones lie.

On 23 October, during a conference at the European Parliament headquarters in Strasbourg, many MEPs attended to speak about the Iranian regime, its belligerence, its human rights violations and how the European Union should be dealing with these issues.

Mrs. Maryam Rajavi, President-elect of the National Council of Resistance of Iran (NCRI), presented the book and explained that it tells the story of a nation that has been utterly suppressed and where human rights do not exist.

This book contains the names of the martyrs, the addresses of some of the secret graves, as well as the names of 35 Death Commissions and their 86 members. 63% of these perpetrators are presently officials of the regime in Iran. #1988Massacre #NoImpunity4Mullahs #FreeIran pic.twitter.com/l1wVpaKq7k

She also spoke about how the European Union, other governments in the West and the United Nations have shamefully ignored the 1988 massacre and said that it has allowed the regime because it has not been challenged, to spread chaos across the Middle East.

Mrs. Rajavi also recalled the time, two years ago, when she warned the European Parliament that if decisive action is not taken with regards to Iran, there will be a “fatal war on the region and the world”. She pointed to the Iranian regime’s recent escalation of belligerence, including the significant attack on a Saudi oil installation and its provocations of tankers and vessels passing through the strategic Strait of Hormuz.

A number of MEPs from across Europe spoke at the conference, voicing their support for the Iranian Resistance and the people of Iran who are seeking democracy, freedom and human rights.

The conference was chaired by Polish MEP Anna Fotyga who called on the European Union to pay attention to the human rights situation in the country when it comes to dealing with Iran.

On the same day, the Police Chief in Albania held a press conference detailing the Iranian regime’s involvement in a number of terrorist activities and plots against the resident members of the Iranian opposition. It was confirmed once again that Iranian officials were involved in these malign activities.

#Albanian Police Chief revealed, this Wednesday 23 October 2019, a terrorist plot in detail against the #MEK’s headquarters in Tirana planed by the Quds Forcehttps://t.co/UqOpbUgFGm#Iran #FreeIran @USAdarFarsi pic.twitter.com/DWVAroAukd