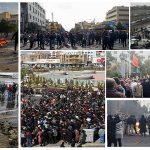 Written by Mohsen Aboutalebi on December 3, 2019. Posted in NEWS 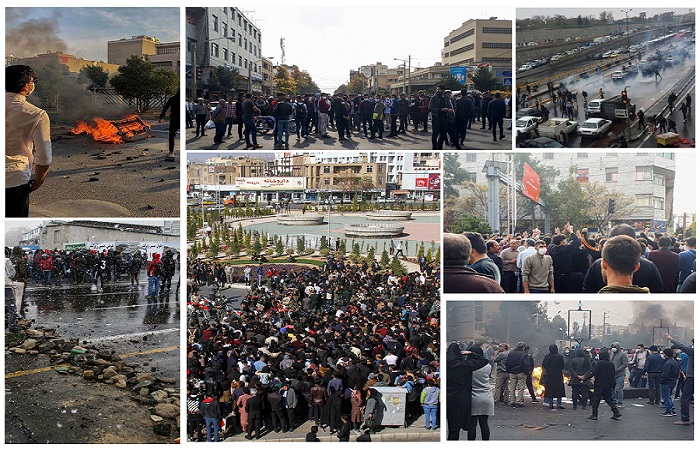 Anti-regime protests in Iran entered their nineteenth consecutive day on Tuesday, have spread to 187 cities, according to the Mujahedin-e Khalq (PMOI/MEK), despite an extensive and brutal crackdown that left 750 protesters dead, 4,000 injured, and 12,000 arrested.

These protests began after the regime tripled the price of fuel overnight but soon became about the regime as a whole, with people, fed up with 40 years of tyranny, calling for regime change. The regime intensified their crackdown and even shut down the internet to prevent news from reaching the outside world.

So far, the MEK has named 222 of the dead protesters. Due to the regime’s secrecy around things that make them look bad, the statistics could be much higher.

What happened on Sunday?

Hundreds of people attended the funeral of two young fuel porters, murdered by the regime in Miandoab, northwest Iran. The mourners expressed anger at the regime and its brutal security forces.

Azarab manufacturing plant workers went on strike to protest unpaid wages, which is a regular cause of protests in Arak, Markazi province.

Meanwhile, the people of Sarbaz, Baluchistan, closed the roads at the entrance of the city, so security forces opened fire on them.

Elsewhere, merchants across several provinces went on strike for various reasons related to the ongoing protests. In Nikshahr, Sistan and Baluchistan province, merchants held a strike to protest the killing of the fuel porters, as well as the imprisonment of rights activists, and high prices.

This came one day after most shopping centers and restaurants in Marvdasht, Fars province, shut down to protest the killing of demonstrators and the brutal crackdown on protests. This was important because Shiraz, the capital of Fars, saw intense demonstrations during the recent uprising.

The continuing protests have struck fear into the regime officials, with many believing this is the worst crisis the regime has faced and that the protesters must be punished gravely.

Hesamodin Ashna, an advisor to regime president Hassan Rouhani, said: “No one claimed that all the people who came out to the streets were rioters. In reality, all the authorities who must be held to account will be held to account.”

Ashna, who is also a former deputy intelligence minister, previously compared the protests to the Eternal Light operation of the MEK in 1988, when the Iranian opposition brought the regime to the verge of downfall. His recent comments indicate he is retracing his steps as protests continue.

Hossein Rezapour, the Friday Prayer leader of Javad Abad, described the uprisings as a “dangerous conspiracy” and said that “the [MEK] was the main player”.

The uprising in November showed that the regime is not capable of containing the roaring tides of protests and social rebellion, and that the Iranian people will never give in. The conditions will not revert back to the pre-uprising equilibrium. #IranProtests #Iran pic.twitter.com/94gMu3nvsW

The bottom line is that the regime is scared, as they should be. These protests will bring them down.