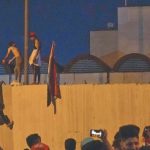 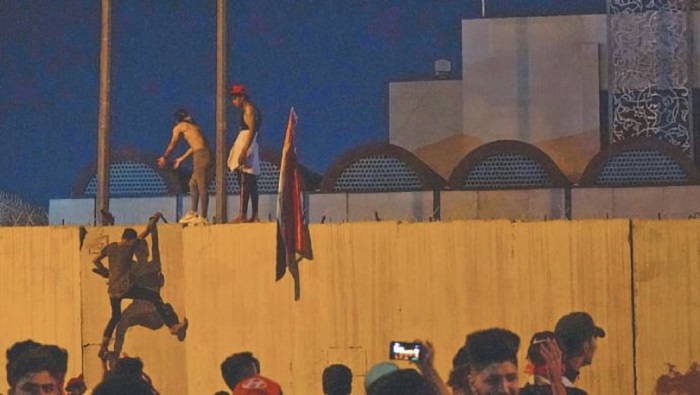 More than 1000 young Iraqi protesters attacked the Iranian consulate in the holy city of Karbala on Sunday evening, with demonstrators torching the wall outside of the consulate before placing an Iraqi flag on the wall around the consulate.

On the night alone, Iraqi security forces shot dead three protesters and wounded 19 others as the attempted to disperse the protesters, but over 250 people have been killed since the protests began early last month.
The Associated Press reported that security forces in Baghdad have fired tear gas and rubber bullets to keep protesters from breaching the barricades on two main bridges leading to the heavily fortified Green Zone, where the government is headquartered.
The protesters have made clear that one of their major problems is the Iranian regime’s control in Iraq and one of their main demands has been the expulsion of the Iranian regime and its proxy militias from Iraq. The protesters have explained to international media that the Iran-backed government of Iraq is corrupt and kowtows to the mullahs.
The AP said that protesters in southern Iraq attacked the offices of Iran-backed political parties and militias, “setting fire to some of them”, and that the attack on the Iranian consulate in Karbala, located south of Baghdad, is just “the latest sign of mounting anger against Tehran’s involvement in the country’s affairs”.
These protests are bigger in the southern provinces of Iraq because that is where Tehran has the most influence and because Karbala, which is one of the world’s main Shiite pilgrimage sites, holds enormous importance for Iran’s regime.

Reports of continuing demonstrations in #Iraq with more protests against #Iran's malign meddling.https://t.co/0g1LDhUeTF

The Wall Street Journal reported: “Iraqi protesters last year torched the Iranian consulate in Basra in a similar attack, although the protests that triggered it was smaller. The rage against Iran has been fuelled by allegations by human-rights groups that paramilitary groups backed by Tehran have killed and abducted protesters as part of a crackdown by security forces that has killed more than 250 people since the protests started.”
The protesters in Karbala had previously gone out with banners that read: “Iran is the reason for the catastrophe.”
Meanwhile, Iraqi protesters in the holy city of Najaf have also shown their fury at Iranian interference in their country by changing the name of the main street therefrom “Khomeini”, which is the last name of the Iranian regime’s founder and former supreme leader, to “October revolution”.
The protesters’ problems will not end until the Iranian Regime is gone.

Mujahedin-e Khalq (PMOI/MEK) time and again warned about the meddling of the Iranian regime in Iraq.