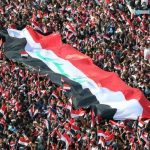 MEK-Iran: Iran’s Supreme Leader’s Mouthpiece Calls for Takeover of US Embassy in Iraq

Written by Esmail Mohades on November 1, 2019. Posted in NEWS 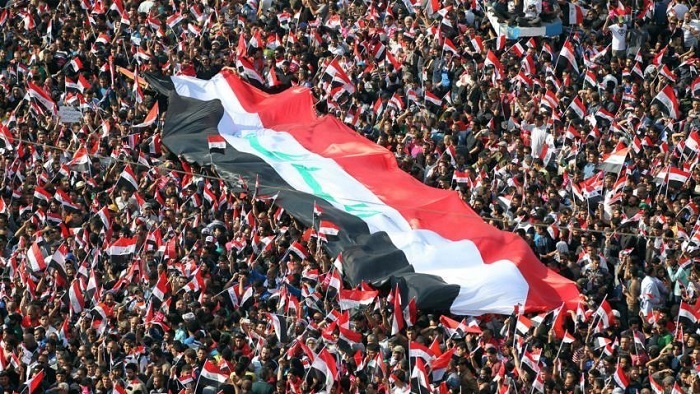 Millions of Iraqi people have taken to streets demanding eviction of the Iranian regime from Iraq. (file photo)

On October 30, 2019, the state-run Keyhan daily, known as the government’s mouthpiece called for the takeover of the US Embassy in Baghdad.

Hossein Shariatmadari, editor and representative of Iranian regime’s supreme leader Ali Khamenei in Kayhan newspaper, in its editorial called for the takeover of US Embassy by Iran-backed militias in Iraq, known as “al-Ḥashd ash-Shaʿbī” (also known as “Popular Mobilization Forces”-PMF. PMF along with the criminal ” Asa’ib Ahl al-Haq” another regime proxy which were heavily involved in several massacres of MEK members in Camp Ashraf and Camp Liberty.

“in previous note, by mentioning the takeover of US embassy in Iran, which Imam called it the “second revolution”, the issue was raised in the context of a question that why the Iraqi revolutionary youths … are not ending the presence of US embassy in Baghdad, which is the epicenter of conspiracy and espionage against the innocent people of Iraq!? And why are you not eliminating and throwing out this infected wound from your holy land? A takeover of US espionage center in Islamic Iran and eliminating that epicenter of conspiracy had many benefits for us, and then why the revolutionary youths of Iraq deprive their holy land of these benefits?”

One of the main demands of demonstrators in Iraq and Lebanon is the eviction of the Iranian regime and its proxy terrorist militias from their country, to divert the issue, supreme leader of the regime Khamenei, claimed that the protests were inspired by Washington and the Saudis.

Accordingly, in the editorial, Shariatmadari concluded that recent uprising in Iraq has been managed by the US embassy and Saudis, and takeover of the US embassy in Baghdad is the first step to confront the uprising and called on Iran-backed militias in Iraq for the seizure of the Embassy.

What Shariatmadari refers to as “the benefits of the US embassy takeover” goes back to the situation of the regime in 1979. At the time the mullahs needed a major crisis in order to eliminate all the democratic forces in Iran and stabilize their position. By taking over the US embassy and taking 52 personnel of the embassy hostage for 444 days, the mullahs suppressed all the democratic forces and tried to establish a theoretical regime with the absolute rule of the mullahs.

The protests in Iraq and Lebanon threaten the Iranian regime’s regional influence at a time when it is struggling under crippling U.S. sanctions. Since one of the main demands of the demonstrators in Iraq is the eviction of the Iranian regime, its affiliated Shiite parties, and proxy terrorist militias from that country the mullahs are terrified of their position in Iraq.

“During renewed protests this week, men in black plainclothes and masks stood in front of Iraqi soldiers, facing off with protesters and firing tear gas. Residents said they did not know who they were, with some speculating they were Iranians.” AP reported on October 30, 2019, adding: “Iran is afraid of these demonstrations because it has made the most gains in the government and parliament through parties close to it” since the U.S.-led invasion of Iraq in 2003, said Hisham al-Hashimi, an Iraqi security analyst. “Iran does not want to lose these gains. So it has tried to work through its parties to contain the protests in a very Iranian way.”

In southern Iraq, protesters have attacked and torched the offices of political parties and government-backed militias allied with Iran.

“All the parties and factions are corrupt, and this is connected to Iran because it’s using them to try and export its system of clerical rule to Iraq,” said Ali al-Araqi, a 35-year-old protester from the southern town of Nasiriyah, which has seen especially violent clashes between protesters and security forces.

“The people are against this, and that is why you are seeing an uprising against Iran,” he said.

Overnight Tuesday, masked men who appeared to be linked to Iraq’s security forces opened fire on protesters in Karbala, a holy city associated with the martyrdom of one of the most revered figures in Shiite Islam. At least 18 protesters were killed and hundreds were wounded in bloodshed that could mark an ominous turning point in the demonstrations. In Baghdad, protesters burned an Iranian flag. Days earlier, protesters had gathered outside the Iranian Consulate in Karbala, chanting “Iran, out, out!” AP reported.

In such circumstances, the regime needs to resort to violence and to suppress the demonstrators by its militias and affiliated Shiite parties.

The Iranian regime's meddling in the region is not from a position of strength but derives from the crises it faces and its fundamental weaknesses.
#Iran#FreeIran pic.twitter.com/hf1H2ZjeYY

By raising the issue of the US embassy takeover in Baghdad, Khamenei is trying to bully the Western governments to turn a blind eye to crimes of its proxy forces and militias in Iraq, so the regime and its affiliated forces could freely suppress the uprising.