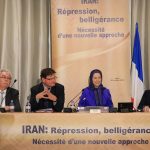 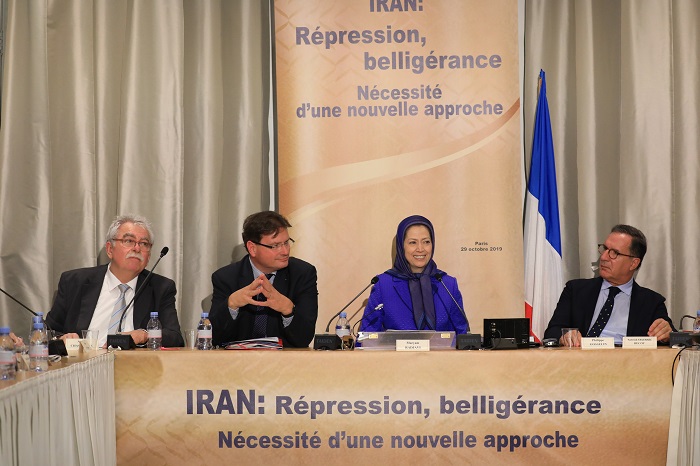 The Parliamentary Committee for a Democratic Iran (CPID) held a conference in the French National Assembly about the human rights situation in Iran on Tuesday, with Maryam Rajavi, president-elect of the National Council of the Resistance of Iran (NCRI), serving as keynote speaker, where they addressed the need to hold the Iranian regime accountable for its abuses.

During the conference, titled “Iran: repression, belligerence, need for a new approach”, several French deputies from across the political spectrum have underlined the need for a new policy towards the regime following the failure of recent international initiatives contains the regime’s destabilizing role in the Middle East.

At the conference, Rajavi introduced a new book containing the names of 5,000 of the 30,000 members of the Mujahedin-e Khalq (PMOI/MEK) who were executed by the regime in 1988.

She also drew attention to women’s rights abuses in Iran, noting that there is “institutionalized discrimination against women” in Iran’s laws, with “a large number of women are incarcerated in Iran for their peaceful activities or their faith”.

Rajavi also stressed that the regime takes foreign nationals hostage and uses its embassies to commit terrorist attacks in the West, which undermines European efforts to reduce tensions with Iran. She also explained that the regime will not change its behavior, rather it has been emboldened by the appeasement policies of the West, so it must be overthrown by the people.

Rajavi said: “France must take the initiative to open the path to democracy in Iran, and to support human rights, the Iranian people and the Resistance. This is the only way we can restore peace in the Middle East and bring about stability and democracy.”

Michèle de Vaucouleurs, Vice-Chairperson, and Chairperson of the Parliamentary Committee for a Democratic Iran noted that the Committee informed French parliamentarians and public opinion on human rights and women’s rights in Iran. She said that during her recent visit to Ashraf 3, the new home for the PMOI/MEK in Albania, she saw a source of hope for Iranians who hope to liberate their country from a religious dictatorship.

MP André Chassaigne said that Iran is boiling over with popular protests and that the only solution is to support the Iranian people in addressing the regime’s violations of human rights, while Philippe Gosselin, the co-chair of the Parliamentary Committee for a Democratic Iran, praised   Rajavi’s ten-point plan for freedom and democracy in Iran.

MP Yannick Favennec, a member of the Defense Committee of the French Parliament and Vice-Chairman of the Parliamentary Committee for a Democratic Iran, said that Iran was destroying the security of the region by increasing instability.

Favennec said: “Foreign war and negotiations without end lead to more aggression and threats. We must think about change and support regime change by the Iranian people and the Iranian resistance.”