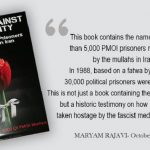 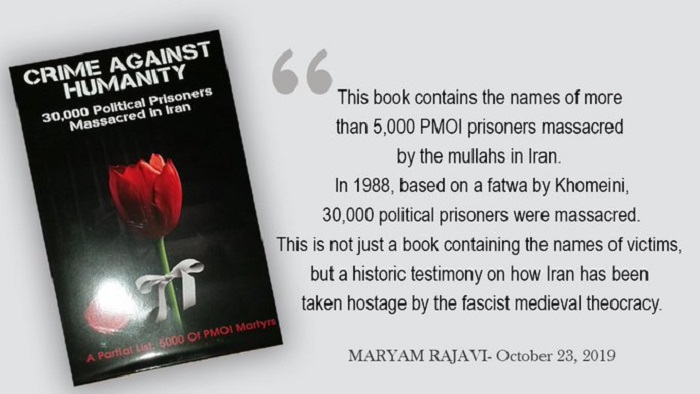 A newly published book about the names of MEK members killed in the 1988 massacre in Iran was revealed by Mrs. Rajavi in the European parliamentarians

European parliamentarians praised the leading Iranian dissident group, Mujahedin-e Khalq (PMOI/MEK), and urged the European Union and its member states to take further action to confront Iran over its human rights abuses on Wednesday after Mrs. Maryam Rajavi, President-elect of the National Council of Resistance of Iran (NCRI) debuted a new book detailing the Regime’s crimes.
The book, called “Crime Against Humanity”, contains the names of 5,000 people slaughtered by the Iranian regime during the 1988 massacre of 30,000 political prisoners, mainly MEK members. (The names of many victims are not known because of the secrecy and silence that the regime enforces around the massacre, with victims buried anonymously in mass graves and the regime imprisoning those who dare to question where their loved ones are.)

The book contains the locations of the mass graves of the victims of the 1988 massacre in 36 cities, names of members of 35 death commissions, and names of 110 cities where the massacre was carried out and the locations of three dozen mass graves.
At the event, keynote speaker,  Maryam Rajavi, called for a “firm European policy which necessarily requires lending support to the Iranian people’s resistance [in order] to establish democracy and popular sovereignty” in Iran.
She then highlighted recent events, including attacks on tankers in the Strait of Hormuz , and on the oil refinery in Saudi Arabia, as proof that her prior warning to the European Parliament is coming true, which was that if Iran was not dealt with decisively, they will “impose a fatal war on the region and the world”.Many EU politicians attended the release, held in a committee meeting room at the European Parliament in Strasbourg, France, praised Rajavi and the MEK, and called on the EU to adjust its Iran policy.

We will not give up until the details of this crime against humanity are clarified, all the graves are specified, the ruling executioners face justice, &the regime of #1988massacre is toppled by the people of #Iran, the resistance units &the Liberation Army. #NoImpunity4Mullahs pic.twitter.com/mJjkIyiEqE

Polish MEP and former minister of foreign affairs Anna Fotyga, who chaired Wednesday’s event, called on the EU to “focus on human rights abuses when it comes to relations with Iran”.Italian MEP Patrizia Toia told Rajavi: “You have our full support in your struggle to achieve freedom and democracy for your people.”
While Andrea Dessi, a senior fellow at Rome-based think tank the Institute for International Affairs, said this could push the EU into adopting a more hard-line stance toward Iran in line with the US.
Dessi said in an interview: “We are not going to see a policy shift on Iran from one day to the next. This was a relatively low-key event, but it’s still significant that it took place and that it was well attended even as the European Union is focused on Brexit and what is taking place on the Turkey-Syria border.”