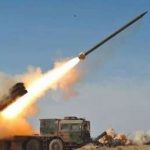 On September 13, 2019, the Saudi Aramco complex was targeted with dozens of missiles coming from Iran’s IRGC.

The attack on Saudi Arabia’s oil facilities was not spontaneous rather it was a strategic and carefully planned decision in the highest echelons of the mullahs’ regime. Now that the dust has somewhat settled, looking back at the attack, the military operation does not fit the Houthis’ description. No doubt Islamic Revolutionary Guard Corps (IRGC) fingerprints are all over it.

Hassan Rouhani made it clear in his cabinet meeting on Wednesday that the regime was behind the attack on Aramco oil facilities. He said:

“They attacked an industrial site to warn you (the U.S., Arabic, and European countries) and teach you a lesson.”

Kazem Anbarlooi, an Iranian regime’s strategist with close ties to Supreme Leader Ali Khamenei published an article on May 6th

“About Battle Arrangements” in Resalat Daily, a conservative paper giving an advance preview of the upcoming attack on Saudi Arabia. He is a top-notch ideologue in Khamenei corner. Ambarlooi writes: “The key to the Strait of Hormuz and Bab-almandab is in the hands of …the Iranian nation and government.”

“Saudi Arabia and the UAE oil and those who are associated with American conspiracies cannot always be safe. Missile power, drones and … are not the children’s toys and decorative items. If the Americans have no appetite for the fight, there is enough motivation to fight on the other side.” Ambarlooi refers to the regime being ready to fight.

Ambarlooi then threatens the U.S. and adds: “The Americans are better off giving up on their adventures and cut their economic losses and that of the world’s.”

“World powers know that in the case that oil is completely sanctioned and Iran’s oil exports are brought down to zero, international waterways can’t have the same security as before.”

Rouhani also added: “So unilateral pressure against Iran can’t be to their advantage and won’t guarantee their security in the region and the world.”

Reiterating Iran’s chilly response to the security mission, Iranian Rear Admiral Ali Fadavi, a deputy commander of the Revolutionary Guards (IRGC), said no one can secure the {Persian} Gulf other than Iran and countries of the region,” according to the semi-official Fars news agency.

Soon after the attacks on Saudi Arabia’s oil fields and refinery, fingers were pointed at the mullahs’ regime for being behind them. Although IRGC’s proxies in Yemen rushed to claim responsibly hardly anyone took them seriously.

Khamenei gambled the fate of his entire regime by the attacks. He has very limited options at this point. According to his own financial advisers, Iran is a bankrupt state. Not only his coffer does not cover the daily affairs of the country but he has to carry the load of financing his proxies throughout the Middle East.

The #SaudiArabia Aramco oil and gas facility was attacked by the #Iranian regime…https://t.co/1BYHeqFoPY#MEK #FreeIran #WeSupportMEK pic.twitter.com/3XcKk9o4NM

What is the logic behind taking such a high risk?

Khamenei gambled his entire regime by taking the risk of losing everything. He is precisely in that situation.

But he was not wrong in counting on those in the West that are still willing to turn a blind eye on his belligerence in the region.

Mrs. Maryam Rajavi, President-elect of the National Council of Resistance of Iran (NCRI) stated that the attack on a neighboring country’s oil facilities is a major step and a new phase in the warmongering aggressions of the religious dictatorship ruling Iran, adding that exerting pressure and decisiveness is the only language the mullahs understand.

She added inaction only emboldens this medieval regime, whose primary victims are the Iranian people, she noted, emphasizing that the ultimate solution to rid the world of Iran’s ruling religious fascism as the source of all crises in the region is a change of this illegitimate regime by the Iranian people and their organized resistance movement.

The Iranian regime will no doubt fall. It is only a matter of time. Iran is boiling in dissent. Resistance Units of the Mujahedin-e Khalq/ People’s Mojahedin Organization of Iran (PMOI/MEK) riding on the tides of the people’s legitimate wrath against the regime will turn the final page in the mullahs’ regime book.