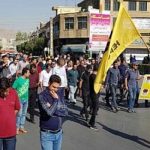 MEK- Iran: Uprising, What Mullahs Fear the Most 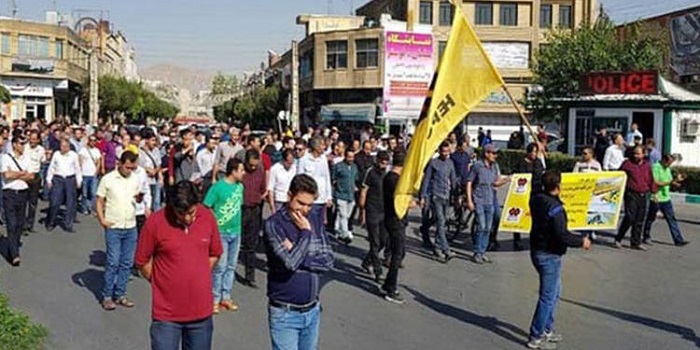 Last week, Iran witnessed a wave of protests across the country. Mujahedin-e Khalq (PMOI/MEK) recorded more than sixty protests and gatherings by workers, teachers, pensioners, people who lost money to credit firms affiliated with the IRGC, farmers, and college students. Even in prisons, political prisoners protested against the inhuman restrictions imposed by suppressive guards.

Workers in Azarab factory, the central city of Arak, demanded their unpaid salaries.

Embers beneath the ashes

Difficult living conditions for the people along with unprecedented corruption and embezzlement, turned the Iranian society to embers beneath the ashes, so that, every single protest or gathering can be turned into social unrest as it happened in Lordegan last week. The majority of the Iranian population’s living under the poverty line is the source of the crises.

…In the most recent labor unrest in #Iran’s industrial heartland, #Arak, in central Iran, Azarab Company #workers protest for the familiar demands; unpaid wages and the return of the company to the public sector. read more.https://t.co/JwhmiEfOXL#MEK @threadreaderapp#Unroll pic.twitter.com/7fRKjzHHgS

Panic spreads to the Iranian regime

After the recent uprisings in Lordegan, Arak, Shush, and Isfahan, the mullahs are afraid of more protests and uprisings, particularly in major cities. They know that every public protest in metropolitan cities can easily spread throughout the country as it happened in December 2018 and January 2019 when 140 cities rose up against the regime.

This panic can be seen in the remarks of Major General Bagheri, General Staff of Armed Forces of the Iranian regime when he said: ” The security of Tehran is constant and stable! It is heartwarming security for the people!” It seems that the uprising in Lordegan as well as other cities across the country, has forced the top security and military officials of the regime to concentrate on the “security of the capital!”

Due to this panic, all security and military forces of the Iranian regime have been on high alert since one month ago in the capital, Tehran, to control and suppress any unpredicted uprising.

Imposing military fury on the society, the Islamic Revolutionary Guard Corps (IRGC) is the main surviving tool for the mullahs. Pointing to the key role of IRGC, Khomeini, the founder of this despotic regime once said: “if there was not the IRGC, there wouldn’t be the country (regime)”

The IRGC has always been ready to suppress any uprising inside Iran for decades.

The policy of appeasement, for four decades, and delay in listing the IRGC as a terrorist organization, helped to expand terrorism in the region and the globe. It cannot be forgotten when Mohsen Rafighdoost, the former Minister of the IRGC, referring to the blast of the US NAVY’s base in Lebanon in 1983 said: ” both the ideology and the explosive (of the blast) had gone from Iran.”

Do Economic Aids Save the #Iranian Regime?
Leashing the mullahs, Europe and the US granted many concessions to the Iranian regime in the past three decades. This “generosity”, sadly, emboldened this regime to expand its terrorism and violation …#MEK https://t.co/n2LS0yEaUU

It is time to put an end to the destructive policy of appeasement and to recognize the main Iranian opposition, the National Council of Resistance of Iran (which includes MEK) as the legitimate and reliable alternative to this terrorist regime. Too much time has already been lost.