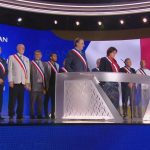 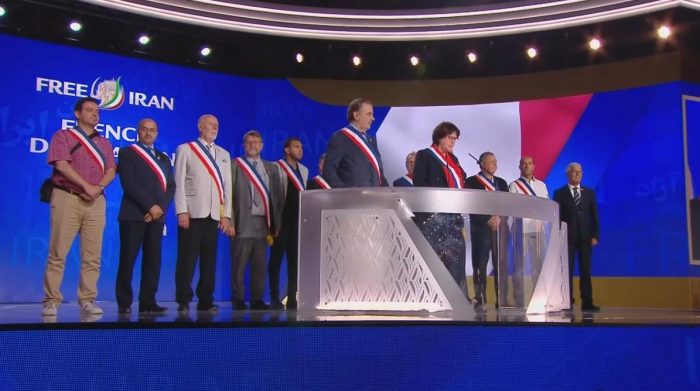 The French delegation including a dozen distinguished elects and personalities expressed their solidarity with the MEK, and the Iranian resistance for a Free Iran- Ashraf 3, July 13, 2019

The 5-day Free Iran Conference at Ashraf 3, The main compound of the MEK’s members in Albania featured a presentation from the Mayor of Paris’s First District, as well as delegations from Italy, Norway, and the military. Numerous human rights and women’s rights activists also delivered speeches, along with other notable dignitaries.

The following are some highlights from speakers:

“The regime has destroyed all that you have owned in Iraq (referring to multiple deadly attacks to Camp Ashraf and Camp Liberty by Iranian proxy forces trying to annihilate MEK, the principal opposition to the dictatorship ruling Iran). You have revived and you keep fighting for a democratic Iran against the mullahs. Your battle is not in vain and I know one day you will be hosting me in a free Iran,” said Ms. de Vaucouleurs.

French MP Michèle de Vaucouleurs at #MEK “#FreeIran” conference in Ashraf 3:
“I know one day you will be hosting me in a free #Iran“#IStandWithMaryamRajavi #WeSupportMEK pic.twitter.com/Hpelocm6PH

“The French people consider you brothers and sisters. Article 2 of the human rights declaration says that the aim of any political group is human rights and that includes the right to resist oppression,” she concluded.

Mayor Legaret presented a declaration to Ashraf 3, declaring his municipality and Ashraf 3 sister cities. “We have decided to declare Ashraf 3 a city of international dialogue and a sister city of the 1st Arrondissement of Paris. We want to sign a declaration with the mayor of Ashraf 3,” Mayor Legaret said upon presenting the declaration. “We promise to keep a dialogue between our municipalities and Ashraf 3. I’m happy with all my colleagues to give you this declaration.”

“Iranian brothers and sisters, it is our honor to participate in this meeting to celebrate the freedom of speech and thought,” said Tasso.

“Your dream is guided by President Maryam Rajavi. I had the honor to meet President Rajavi at the meeting last year and I admire her charisma and Ten-point Plan for a Free Iran,” said Rampi.

Italian MP Giuseppina Occhionero at #MEK “#FreeIran” conference in Ashraf 3:
"Your martyrs sacrificed their lives for freedom for #Iran"
She added:
“We cannot have appeasement with such a bloodthirsty regime. We must investigate the #Iranian regime’s #HumanRightsViolations…" pic.twitter.com/TQvj4Ko77N

“Your martyrs sacrificed their lives in order to achieve freedom for Iran. We cannot have appeasement with such a bloodthirsty regime. We must investigate the Iranian regime’s human rights violations,” said Occhionero.

“I worked for Senator Edward Kennedy who taught me that the challenge of helping the people who fight for freedom is a lifetime goal,” said Ambassador Ginsburg. “We believe that we can help you to achieve what you wish to achieve,” he added.

“My message for the rotten Khamenei: We know that you are trying to destroy the will of your people and you hide behind the injustice you do by killing and torturing people. But at the end of the day, the ruling mullahs in Iran will be overthrown,” said Dr. Al-Ansari.

"We will see soon that @Maryam_Rajavi goes to Tehran and calls for the peace that she struggled so much for." – Dr. Salman, Al-Ansari and Saudi Arabia #FreeIran #Iran #IStandWithMaryamRajavi #sp @4FreedominIran https://t.co/vLf43UpUdG

“Last year, an Iranian diplomat was arrested in Germany because he wanted to bomb a great event by the Iranian Resistance in Paris in which I personally participated,” Lintner said, referring to last year’s attempted bombing of the Free Iran Rally in Paris. “We should not allow the mullahs to keep us hostage and impede and hinder us in your steps forward.”

"Your movement, under the leadership of Madame @Maryam_Rajavi is a democratic alternative to the mullah regime." – Eduard Lintner #FreeIran #Iran #IStandWithMaryamRajavi #sp @4FreedominIran https://t.co/BTuO4Oxfff

“Ladies and gentlemen, you are the ones who continuously fight for a free Iran and Europe must support you. Only in this way can we achieve peace in the world,” said Lintner.

“To my government: We are not allowed to step back and pretend we are blind for the sake of economic interests. We need to support these people who are showing us what is going on,” said Patzelt.

German MP Martin Patzelt: I urge Germany’s government: not to step back & turn a blind eye on what’s happening in Iran for economic interests. We need to support who picture the reality of Iran for us.#IStandWithMaryamRajavi #WeSupportMEK #FreeIran pic.twitter.com/nJtKXgNItk

“To the Iranian regime: Don’t think that you will win. I was raised in Eastern Germany, and I have seen when the people want something, they will prevail. This is the experience of my life and I hope we will achieve this together,” he added.