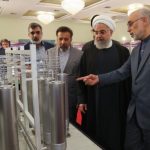 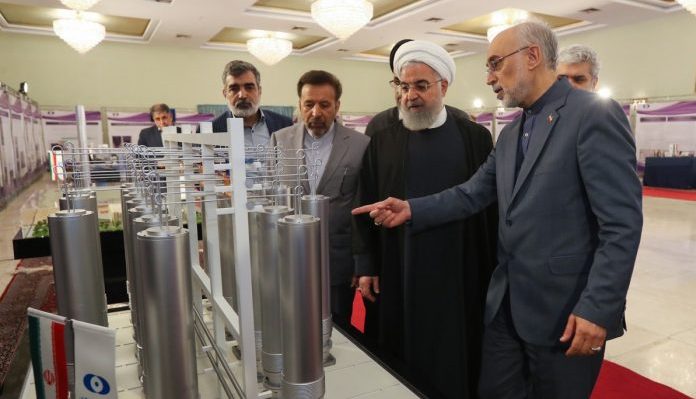 Iranian regime President Hassan Rouhani rejected a European plan to save the flawed 2015 Iran nuclear deal at a cabinet meeting on Tuesday. The European initiative offered Tehran a $15 billion line of credit in return for an agreement that the regime would not take the third step in further violating the nuclear deal, demonstrating the Iranian regime’s deep crisis. Practicing the usual blackmail methods, Rouhani did leave a small window for negotiations open, as fully exiting the deal would endanger the regime’s standing with the EU and further isolate the regime from the international community. He agreed to give Europe two months to find a solution to save the deal.

Despite this two-month waiting period, the Iranian regime seems determined to continue with its plans to violate the terms of the Joint Comprehensive Plan of Action (JCPOA), otherwise known as the Iran nuclear deal. An official from Rouhani’s office said that the regime “will announce the third step that has an extremely important backbone and will accelerate the activities of Iran’s Atomic Energy Org.”

Having failed at piracy, Iran resorts to outright blackmail – deliver us $15 billion or we will further our nuclear developments. Sounds very similar to the threats Iran made a couple months back. It is becoming a pattern. #NuclearExtortion https://t.co/4FjC57wmsd

A spokesman for Rouhani’s cabinet Ali Rabie commented on the negotiations between Europe and Iran on Monday. “The main issue of these negotiations must be that they buy oil from us. We must sell oil and the money should reach Iran easily… If prior to the set deadline Tehran’s satisfaction is not gained in regards to commitments being met, we will take a strong step in implementing the new round of reducing our commitments,” he said.

The mullahs’ nuclear & missile programs, warmongering & terrorism are consequences of the appeasement policy which must no longer continue. Just as giving immunity to the perpetrators of the #1988Massacre must also be stopped. #Iranhttps://t.co/FnzTnVG2Ro pic.twitter.com/WPWhQWxTn7

A spokesman for the regime’s Foreign Ministry Abbas Mousavi echoed those statements. “These measures will be stronger than our first and second phase,” he said. “If we do not witness the necessary will from the European parties to return to their JCPOA commitments, we will take our third step.”

A Revolutionary Guards (IRGC)-affiliated newspaper commented on the near-impossibility of crafting a deal with Europe which would allow the regime to sell oil to the EU without falling afoul of U.S. sanctions. The article wrote: “Zarif said the Europeans have nearly ended all trade relations with us and it is necessary that they take the necessary steps. INSTEX is a preliminary measure for Europe to implement its commitments. The Europeans and other JCPOA members had provided 11 commitments.”

The IRGC-affiliated Fars news agency quoted Zarif on the regime’s plans for the third step in leaving the Iran nuclear deal. “The third step is going through as scheduled. What the French President is continuing with his American partners is an issue between the French and the European Union. What is important to us is that Europe implements its commitments in this agreement,” Zarif was quoted as saying.

The state-run Farhikhtegan daily also weighed in on the issue, writing: “Considering the Europeans’ lack of cooperation, the government is forced to take its third step. This will most likely be a lethal blow to the JCPOA. As a result, Hassan Rouhani is attempting to divert public attention from the status quo in order to decrease the impact of his ideas among public opinion.”

The MEK’s Opposition to the JCPOA

The MEK was instrumental in uncovering the mullahs’ nuclear program, which led to the sanctions which were lifted in 2015. Mrs. Maryam Rajavi, President of the Iranian Resistance, along with the MEK, has always called for a firm position as the only language the religious dictatorship ruling Iran will understand. Nevertheless, there has been plenty of evidence that the regime has not been in full compliance with the agreement and posed a threat to global peace and security.

It is now clearer than ever that the Iranian regime cannot be trusted and that any negotiations are doomed to fail.