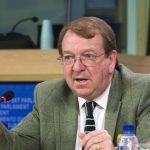 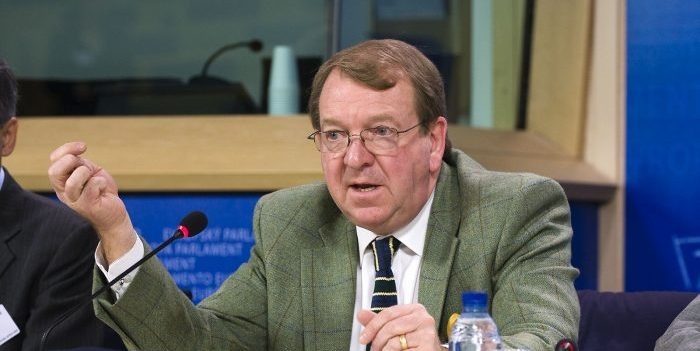 Struan Stevenson, Former MEP, and  coordinator of the Campaign for Iran Change

The visits of Iranian regime Foreign Minister Zarif to France and Nordic countries triggered a crisis in the regime.

On his visit to Sweden, reacting to protests by the MEK Iran supporters against his presence in Sweden, Zarif revealed his terrorist nature and said: “Ask any of those individuals standing outside to attend any meetings with Iranians (meaning the regime’s Revolutionary Guards and agents) and then see whether they would survive. They would not stay alive for a minute…. They cannot even stay in Iraq because the people of Iraq (meaning the regime’s proxies in that country) will eat them alive.”

#Zarif, the FM of the religious dictatorship ruling #Iran, If regime agents capture dissidents, they will eat them alive and not let them live for a minute.#ban_Zarif #ZarifIsALiar pic.twitter.com/NQnaca49eq@CdnPress #Cdnpoli .@CanadaFP .@StateDept .@VOAIran#NoImpunity4Mullahs

Struan Stevenson, coordinator of the Campaign for Iran Change, and former member of the European Parliament in an article in UPI titled “Iran’s foreign minister should be banned from Europe” clarifies how Zarif and the ministry he represents is involved in terrorist activities in Europe.

“As foreign minister, Zarif is in charge of Iran’s army of ambassadors and diplomatic staff. In June 2018, he was therefore responsible for the orders given to Assadollah Assadi, a diplomat from the Iranian Embassy in Vienna. Assadi was instructed to hand over 500 gm of high explosives and a detonator to an Iranian couple from Antwerp, Belgium. He ordered them to drive to Paris and detonate the bomb at a major rally organized by the National Council for Resistance in Iran attended by over 100,000 people.”

The article describes how Zarif flew to Vienna the day following the plot:

“Zarif had even arranged to fly to Vienna, the day following the proposed bombing outrage, presumably to congratulate Assadi personally and to spread the usual lies and propaganda, no doubt blaming the Mojahedin e-Khalq/People’s Mojahedin of Iran (MEK/PMOI), the main opposition to the mullahs, for planning the attack on their own supporters so that they could point the finger of blame at the Iranian regime.”

The article continues to enlighten how the regime’s so-called diplomats in Albania were involved in terrorist activities against the MEK:

“Ironically, the senior diplomat whom Assadi had replaced in the Vienna Embassy was Mostafa Roodaki, another trained MOIS agent. He had previously been the head of the Iranian regime’s intelligence station in Austria and had been coordinating activities against the MEK across the whole of Europe. Roodaki had been redeployed to Albania by Zarif, with the rank of the first secretary in the Iranian Embassy in Tirana. He was joined there by a new ambassador appointed by Zarif, Gholam Hossein Mohammadnia, a former high-ranking Iranian intelligence official who had also been a member of the Iranian nuclear negotiating team.

Zarif had clearly instructed his new team of “diplomats” in Albania that their main mandate was to track down and eliminate the MEK, which had created a new compound in the country housing over 2,500 of their members.

But once again Zarif’s plans were thwarted. Albanian intelligence officers uncovered a plot to detonate a bomb at a Nowruz (Iranian New Year) gathering of MEK members in Tirana. Two MOIS agents, together with Mohammadnia and his Roodaki, were expelled from the country by Albanian Prime Minister Edi Rama. ”

The writer mentions other terror plots that bear the fingerprints of Zarif’s diplomat-terrorists and concludes the article by writing:

“With this catalog of assassinations and bomb plots involving Iranian diplomatic personnel under the leadership and guidance of Zarif, it is not surprising that the United States has decided to label him a terrorist. Yet the West continues to believe that his mastery of English and his benign smile mean that he must be a trustworthy moderate with whom we can negotiate. It may be worth remembering that Adolf Hitler’s foreign minister, Joachim Von Ribbentrop, was also a fluent English speaker and could also smile benignly for the cameras. He was executed as a war criminal on Oct. 16, 1946.” 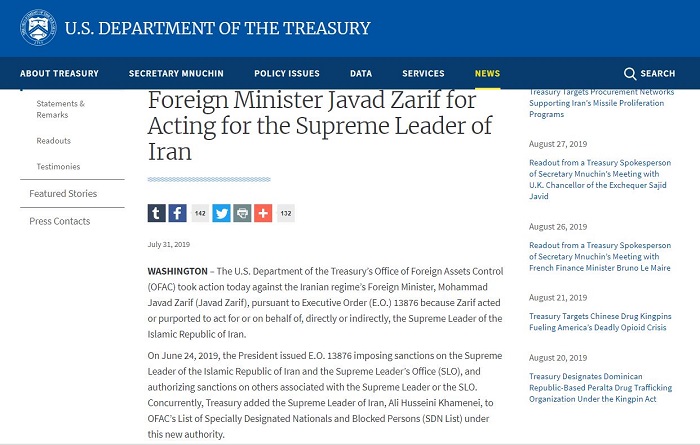 The US Department of the treasury designate Zarif as a terrorist