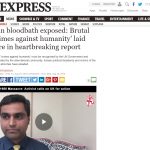 The Iranian Regime’s Crimes Must Be Exposed 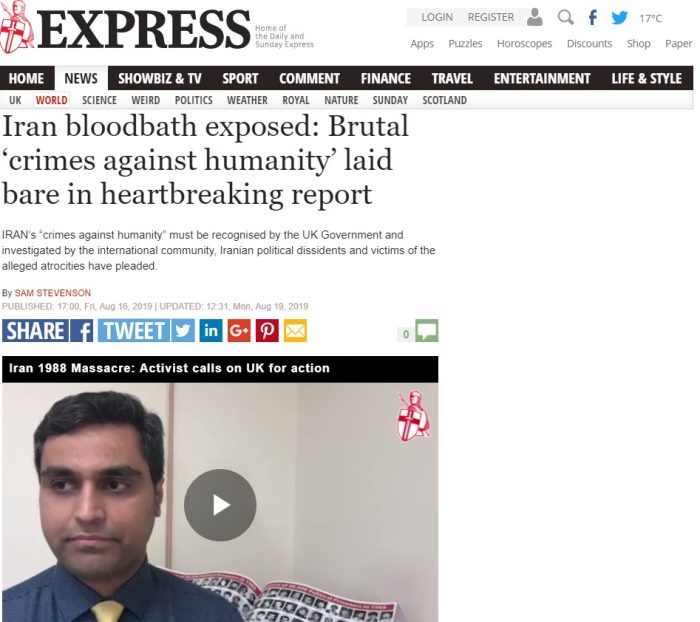 A screen-shot of the Express UK daily reporting on the 1988 massacre of 30,000 political prisoners (mainly MEK supporters), by highlighting the story of one of these victims, Ehsan Qaraee

The world is waking up. The brutal and heinous crimes committed by Iran’s religious dictatorship was exposed in a heartbreaking report on the Express-News website.

The August 16, 2019 report written by Sam Stevenson sheds lights on the horrifying story of Iranian dissident Ehsan Qaraee. The civil engineer and human rights activist’s parents were taken away from him when he was a child. His father was later murdered by the Iranian regime.

The article writes: ” The relentless crackdown on political opponents of Khomeini’s regime culminated in what has been described as a political purge in 1988, known as the 1988 massacre. The majority of those killed were supporters of the People’s Mujahedin of Iran [MEK] although supporters of other factions were executed as well.”

The Call for Justice for the victims of the #1988Massacre is a national issue and an indispensable part of the Iranian people’s noble campaign to overthrow the clerical regime.#Iran pic.twitter.com/5M8KVknVm8

Speaking of his experience, Mr. Qaraee told Express-News that his father was murdered by the regime and claimed that his mother was savagely tortured in front of her one-year-old daughter’s eyes.

Mr. Qaraee said, “My parents were both teachers—my father was a historian and my mother was a math teacher.”

He continued: “For me, I would like some recognition from especially the UK Government that this crime was a crime against humanity. And I would like that the UN establish a committee—a truce committee—and that they investigate this crime.

“We are talking about Ebrahim Raisi who is the head of the judiciary system in Iran—or Mostafa Pourmohammadi who is Justice Minister.” Mr. Qaraee added.

Key figures involved in Iran's #1988Massacre:
Ebrahim Raisi, the deputy prosecutor general of Tehran in 1988 & member of the Tehran “death commission”, ran for the presidency in 2017 & has held several high-profile positions.
via @amnesty@JavaidRehman @mbachelet @antonioguterres pic.twitter.com/PYePp9xIHL

Speaking to Express-News, Amnesty International’s lead researcher on Iran, Raha Bahreini, said: “For three decades, families and survivors and former prisoners have been struggling for truth and justice and they have documented this horrific crime in order to counter the narratives of denial and distortion the Iranian authorities have been perpetuating.”

“We have relied on this legacy of documentation and tried to use the new evidence that has emerged in order to further the struggle of the families and survivors for truth and justice,” Raha added.

Appeasing the mullahs, policymakers in the West tried to turn a blind eye toward what was happening in Iran during the last four decades. However, it is no longer possible for the Iranian regime and its lobbyists to cover or deny their crimes. The Iranian opposition and the MEK are determined to bring the perpetrators of crimes against humanity in Iran to justice. It is time to unfold the untold story of thousands of Iranians who have been the victims of the regime’s brutality.