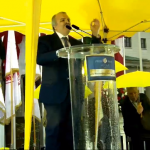 Mohammed Mohaddessin’s Speech at the Free Iran Rally in Berlin 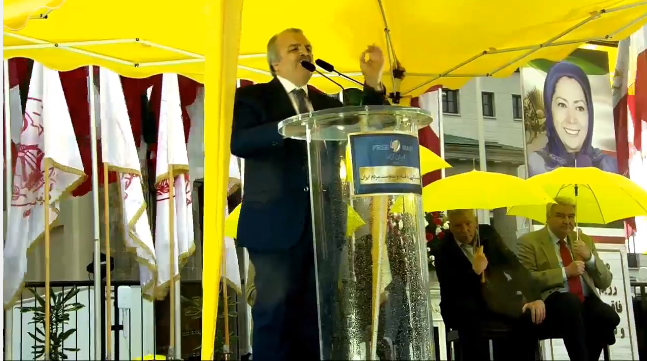 Mohammad Mohaddessin, Chairman of the Foreign Affairs Committee of the NCRI, addressing the immense rally of MEK supporters in Berlin

Mohammed Mohaddessin, Chairman of the Foreign Affairs Committee of the National Council of Resistance of Iran (NCRI), gave the closing remarks at Berlin’s Free Iran Rally on Saturday. In his fiery address, he saluted the MEK and Iranian Resistance for their determination, urged the European Union to expel agents of the MOIS, and challenged proponents of the policy of appeasement.

“Your presence in this weather shows your great determination for the downfall of this regime, for the overthrow of this regime. I salute all of you,” Mr. Mohaddessin said to the 15,000 MEK supporters gathered in the rain.

Addressing #Berlin rally: Your strong presence here today, under this shower is a sign of your determination for #IranRegimeChange. It shows that the #Iran-ian regime has no legitimacy because you are the voice of the Iranian people& voice their quest for a #FreeIran. pic.twitter.com/jQdTv0IYEH

Mohaddessin vowed that the leaders of the Iranian Resistance would not give up or “give a single inch” until Iran was free.

“The world must hear our voice. This regime lacks any legitimacy. You are the true representatives of the Iranian people. The people of Iran cannot come to the streets and show their objections, but you are representing those people of Iran and their will for the downfall of the regime and the establishment of a free and democratic Iran under the leadership of Mrs. Maryam Rajavi.”

Expel Agents of the MOIS

Mr. Mohaddessin also stressed that the European Union must take decisive action against the regime’s Ministry of Security and Intelligence (MOIS) agents, warning that not to do so would make them complicit in the regime’s misdeeds.

“The mercenaries of the Iranian regime and the agents of the MOIS must be put on trial and expelled from Europe,” Mohaddessin said. “They are the cause of instability and terror in Europe. They must be expelled,” he added.

Finally, to those who under the guise of opposing the war, are trying to rescue &prolong the lifetime of the ruling theocracy in #Iran, we say, the only solution to end the war, violence, and crisis in the region is #IranRegimeChange

No Justification for Appeasement

Mohaddessin concluded by addressing those who use their fear of war to justify appeasement of the mullahs. “The time of these games has ended,” he said. “The only true way is the overthrow of the regime for the Iranian people and the region.”