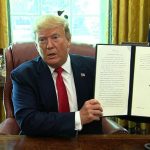 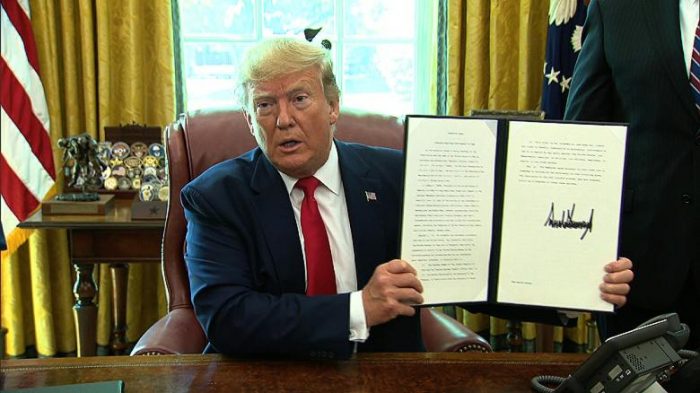 THe president of the U.S., issued a new executive order, sanctioning the Iranian regime’s supreme leader-June 24, 2019

In the latest round of sanctions, the Trump administration is targeting the Iranian regime’s Supreme Leader and other senior officials.

On Monday, June 24, US President Donald Trump announced fresh sanctions against the Iranian regime following the downing of a US drone last Thursday.

President Trump told reporters that the sanctions were a response to Iranian regime aggression but would have happened anyway due to the regime’s increasing hostility in the region.

Last week, the US released a video that it claims show regime forces removing unexploded ordinance from the hull of a Japanese oil tanker in the Persian Gulf. The Trump administration believes the regime was behind two attacks on international tankers.

He added: “We call on the regime to abandon its nuclear ambitions, change its destructive behavior, respect the rights of its people, and return in good faith to the negotiating table.”

The new sanctions are the latest moves from the Trump administration designed to limit the regime’s inflow of cash. In April, Trump and his cabinet announced the designation of the regime’s Revolutionary Guards (IRGC) as a foreign terror organization (FTO). The listing cut off international support for the repressive organ, limiting its ability to accept assistance, support, and counsel from international citizens or companies.

In May, Trump also reintroduced sanctions against the regime’s petrochemical industry. He ordered countries to stop importing Iranian oil in an attempt to bring the regime to the negotiating table.

Senior figures inside the Iranian regime criticized the move. The Iranian Foreign Secretary, Javad Zarif, who was one of the names the Trump administration announced would be subject to sanctions, denounced the decision over Twitter.

In a post, he accused Trump and his advisors of despising diplomacy and having a “thirst for war.” Under the new sanctions, Zarif and others will be excluded from the US financial system and their assets in the US.

The rest of the eight officials include senior figures in the Army, Navy, IRGC, and Iranian aerospace industry.

The White House also revealed that the sanctions could be extended to anybody who has business ties to the named officials. “Anybody who conducts significant transactions with these sanctioned individuals may be exposed to sanctions themselves,” it said in a statement.

Welcomed by the Opposition

Sanctioning Khamenei & his office, the epicenter of crime, corruption & terrorism in #Iran, is spot-on & most imperative. These sanctions must be expanded to the mullahs’ Ministry of Intelligence & Security (MOIS), which has blocked the uprising for a #FreeIran.

The MOIS was behind a string of planned terror attacks on European soil in 2018, including a plan to detonate a car bomb at an opposition-organized event in Paris last summer.

Mohammad Mohaddessin, the chairman of the Foreign Affairs Committee of the National Council of Resistance of Iran (NCRI) also welcomed the announcement of the latest sanctions. He called the move an “imperative step.”

Sanctioning Khamenei & his notorious office is the most imperative step. Thousands of mullahs, IRGC members & torturers have dominated all affairs in the country, destroyed #Iran , shackled the ppl & caused bloodshed & war. All Iranians demand the imposition of full sanctions.

“Khamenei & his office are the primary center of execution, torture, suppression, the export of terrorism & warmongering,” he added. “It is the source of theft, embezzlement, corruption, poverty & unemployment,” and “holds the key to the nuclear weapons program.”

He echoed Ms. Rajavi’s calls for blacklisting the MOIS.