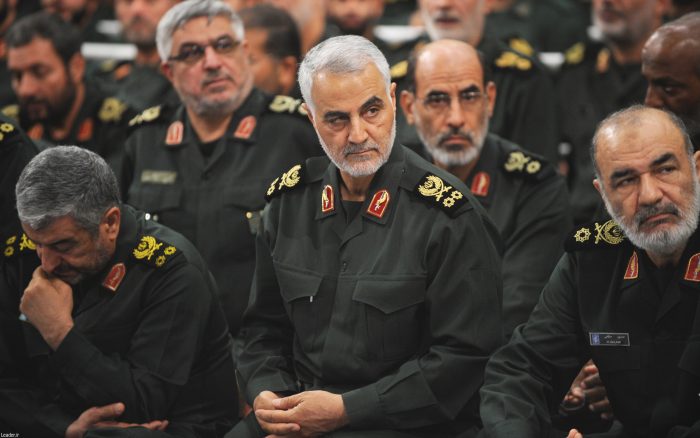 On Monday, Iranian regime Supreme Leader Ali Khamenei announced the removal of Mohammad-Ali Jafari as commander of the Islamic Revolutionary Guards Corps (IRGC). Later that day, he announced the appointment of Hossein Salami, Jafari’s second-in-command, as the new head of the IRGC. Salami was also promoted to the rank of Major General.

The change in leadership comes on the heels of the recent designation of the IRGC as a Foreign Terrorist Organization (FTO) by the United States. The designation has sent shock waves through the regime as those in power struggle to deal with the resulting political and economic consequences.

Khamenei’s decision to remove Jafari from command appears to be related to the FTO designation, which was announced two weeks ago, according to observers and political analysts. A number of irregularities in the transition have raised eyebrows among those who follow the regime closely.

Past IRGC commanders have been appointed to important positions after leaving their commands, including military advisors to the regime’s Supreme Leader. Jafari, by contrast, was appointed as the head of the Baqiyatullah al-Azam Cultural and Social Base. This post is neither related to the military nor is it particularly prestigious for a former IRGC head.

When Khamenei announced Jafari’s removal and subsequent appointment to the Baqiyatullah Base, he claimed that the commander had a desire “to engage in cultural grounds and the soft war.” Khamenei’s reference to the “soft war” is the regime’s suppression of the Internet and social media information and its dissemination of propaganda. The regime has stepped up its social media campaigns in response to the MEK’s successful use of social media to spread unfiltered news and to organize protests. Although this is an important role in the regime, it is unlikely that a military commander would see a job as a social media propaganda director as a suitable promotion.

Jafari’s future within the regime seemed bright two years ago when Khamenei issued a decree extending Jafari’s term as commander for another three years. The former IRGC head’s removal amounts to dismissal from his post.

As Commander in Chief of the IRGC for the last 12 years, Mohammad Ali Jafari shaped the regime’s domestic suppression efforts and military strategies. His removal indicates that the regime sees those strategies as failures.

Under Jafari’s leadership, the Iranian army took over responsibility for border security so that the IRGC could devote its time and resources to suppressing dissent within Iran and exporting terrorism abroad.

During his tenure, the provincial Guards were created, and changes were made to the Basij Force that made them more effective at suppression. These structural changes enabled the IRGC to participate in regional conflicts and wars.

These overtly terrorist actions have landed the IRGC on the FTO list and have been ineffective in suppressing dissent within Iran. Khamenei seems ready to try a new approach.

Khamenei’s new choice for IRGC Commander represents a change from actions to words. While Jafari’s strengths were violent suppression and terrorism, 59-year-old Hossein Salami appears to use propaganda and harsh words as his weapons. He has a history of making threats against other countries.

Two months ago, Salami made threats against Europe, saying that if the EU wanted to disarm Iran’s missile program, “we will have to make a strategic leap.”Last fall, he threatened Saudi Arabia and the United Arab Emirates, saying that if they crossed Iran’s red lines, “we will surely cross yours.”