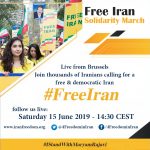 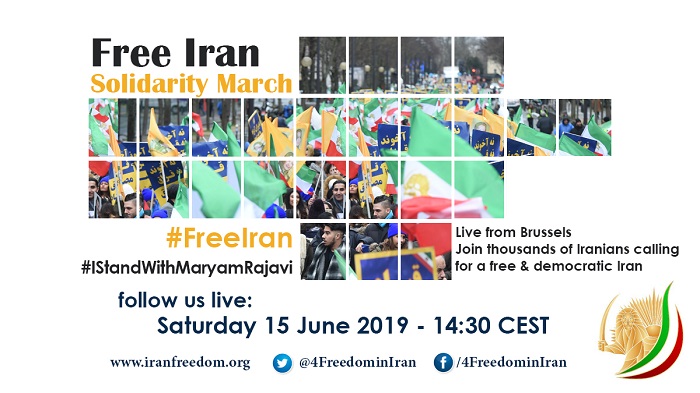 Supporters of the MEK and NCRI will be marching in various cities around the world in June and July 2019 to show solidarity for the Iranian people’s quest for freedom and democracy in Iran and to show support for the only viable alternative to the ruling regime, the National Council of Resistance of Iran (NCRI)

Ever since the eruption of protests in more than 140 Iranian cities in late December 2017, it has become obvious that winds of change inside Iran are in motion and that the Ayatollah’s rule is coming to an end. Slogans like “Death to Khamenei” and  “reformers, hardliners, the game is now over”, are appearing, scrawled on walls or shouted in crowds at public protests, sending a clear message to Iran’s rulers, and the West.

In early January 2017, just two weeks after protests broke out across the country, the Iranian regime’s leader, Khamenei, identified Iran’s main opposition group, the People’s Mojahedin Organization of Iran (PMOI, aka, Mojahedin-e-Khalq or MEK) as a major force behind the uprising. As always, he blamed the US and “foreign enemies” as external influences in an attempt to downplay the MEK’s role in the uprising.

These external factors would come into play in the weeks and months that followed. In May 2018, the US exited the “Nuclear Deal” with Iran. Shortly afterward, Secretary of State Mike Pompeo outlined 12 preconditions for any possible renegotiation of the agreement with the Iranian regime. The conditions included the immediate cessation of the mullahs’ missile development programs and the regime’s exit from regional conflicts in Iraq, Syria, Lebanon, and Yemen.

During the second half of 2018, the Iranian regime, faced with ongoing protests and renewed economic sanctions from the West, had to take action to survive.

It launched a terror campaign in Europe and the US. The regime plotted at least four major acts of terror in Albania, France, the U.S. and Denmark. In each case, the primary target of the attacks was the MEK.

On April 19, 2018, the Albanian Prime Minister revealed authorities had foiled a plot to bomb the MEK’s New Year celebrations in March of that year. Ghomahossein Mohammadnia, the Iranian regime’s ambassador to Albania, and Mostafa Roodaki, the Ministry of Information and Security (MOIS) station chief in Albania, were subsequently expelled from the country in December of the same year.

Inside Iran, the internal crisis was escalating. Corruption within the system had become a common topic of discussion and the ruling regime had lost any shred of credibility it had maintained among its base.

The regime’s strategy for survival became “waiting out the Trump era”. There were talks about how they could buy time until President Trump’s term in office came to an end in the hope that the next administration would adopt a softer stance towards Iran.

That dream, however, was shattered when theTrump administration listed the Islamic Revolutionary Guard Corps (IRGC) as a Foreign Terrorist Organization in April 2019. The IRGC is a central pillar of the regime’s repressive organ. It keeps the Ayatollahs in power and plays a vital role in the suppression of protests and uprisings.

The regime’s survival is the top priority for the rulers in Iran. They know that the people’s uprising, ignited by the MEK’s activities inside Iran, is their main threat.

To confront this internal threat Khamenei appointed hardline cleric Ebrahim Raisi as the new head of the judiciary in May 2019. Raisi was one of three people in charge of the 1988 massacre, where the regime rounded up and executed more than 30,000 political prisons in Iran, most of which were members and affiliates of the MEK.

The designation of Raisi indicates that Khameni has no intention of relinquishing power voluntarily. His regime will confront the opposition with violence and intimidation wherever necessary.

The regime is employing a similar strategy on the international stage. Terrorism and hostage taking will remain the regime’s primary tools to deal with external issues. This was on show when Iran’s Foreign Minister, Javad Zarif, repeatedly pointed out on his recent visit to the US that the Iranian regime has several US hostages in Iranian prisons.

The US’s policy of “maximum pressure” is working. The Iranian regime is feeling the pressure. It can no longer fund Hezbollah and other terrorist forces in the region.

The task of freeing Iran from Ayatollahs's malign rule belongs to Iranian people. Join us at #FreeIran rally and participate in this democratic exercise in support of the Iranian uprising. #IStandWithMaryamRajavi #IranRegimeChange #IranProtests pic.twitter.com/izFQdTS2JU

In order to ensure peace and to prevent the Iranian regime from igniting the flames of war in the Middle East, the West must empower the people of Iran and the Iranian opposition to foster democratic change. Lending support to the exiled Iranians planning rallies and demonstrations across the globe against the regime is a vital part of this empowerment.

Look for marches and rallies in Europe (Brussels, June 15, Berlin, July 6, Stockholm, July 20, London, July 27) and the US (Washington, June 21) and lend your support.