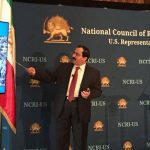 Alireza Jafarzadeh during an NCRI press conference in Washington on 27 April 2017. During this conference, Jafarzadeh based on first-hand information exposed the continuation of the Iranian regime’s nuclear activities despite the nuclear agreement by the IRGC affiliated officials in SPND.

Alireza Jafarzadeh of the National Council of Resistance of Iran penned an op-ed in the Washington Examiner on Sunday, April 21. Entitled ‘Iran’s guard gets a long-overdue but much-deserved terrorist designation’, the piece examines the Iranian regime’s Revolutionary Guard (IRGC) and analyses the recent designation of the group as a foreign terrorist organization (FTO) by the US State Department.

Jafarzadeh began by welcoming the designation. “This is a major step towards effectively countering Tehran’s systemic use of terrorism as a tool of statecraft,” he said.

Iran’s Guard gets a long-overdue but much-deserved terrorist designation https://t.co/qVy8aYkwIy "The next step is to identify all Guard affiliate entities and subject them to sanctions." #BlockIRGC #IRGC #Iran

In order for an entity to be eligible for inclusion in the US government’s terror blacklist, it must meet the State Department’s criteria:

Jafarzedah states that IRGC adequately meets these three criteria. “It is the core apparatus of repression, the primary driver of war and export of terrorism, and it runs Iran’s nuclear weapons and missile projects,” he writes.

The Move was Welcomed by the Iranian Opposition

The People’s Mujahedin Organization of Iran (MEK) and the leader of the opposition, President-elect Maryam Rajavi, have long called for the IRGC’s inclusion on the US terror blacklist. Following the announcement, Mrs. Rajavi issued a statement praising the US’s response to a “long-standing and righteous demand of the Iranian Resistance.”

She called the designation an “urgent and necessary step to end war and terrorism throughout the region and the world.”

Jafarzadeh also examined the response from Tehran. He asserted that the mullahs’ “realize that from this point on, they will have drastically less room to mount terror operations and act with impunity.”

The regime has already demonstrated that it lacks the resources and mechanisms to contain uprisings and public protest. At the tail end of 2017 and into 2018, the MEK-led national uprising quickly spread across all 31 Iranian provinces and hit all of Iran’s major towns and cities.

Alavi (#Iran regime's Intelligence Minister)’s choice to focus on the #MEK is in keeping with the regime’s strategy of placing the blame 4the FTO designation or #IRGC on the resistance organization.#IRGCTerrorists #BlackListIRGC #BlackListMOIS @USAdarFarsi https://t.co/YSbBp37rFm

The regime relied on the IRGC’s suppressive tactics to restore order and maintain its grip on power. With the IRGC severely weakened by the FTO designation and with constrained financial resources, should another uprising emerge, the regime will find its vital repressive organ stretched beyond its capabilities? “In short, Tehran is much weaker now than it was a year or so ago,” Jafarzadeh writes.

“The foreign terrorist organization designation gives U.S. officials an additional tool for prosecuting Americans who help the Iranian regime,” he continues. But beyond the financial limitations and reduced international support, the designation also scores a major psychological victory over the IRGC.

It demoralizes the IRGC forces and their proxies abroad. It shows them that they are not on the winning side. “The designation should also boost the morale of Iranians, who detest the Guard,” Jafarzadeh adds.

It will also resonate across the rest of the world. The designation will prompt second thoughts from European companies considering doing business with the IRGC.

“The next step is to identify all Guard affiliate entities and subject them to sanctions. The foreign terrorist organization designation strikes a major blow to the terror apparatus of the regime. Tehran’s terrorists and those who enable them can finally be made to pay the price.”