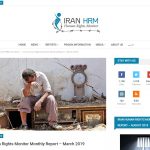 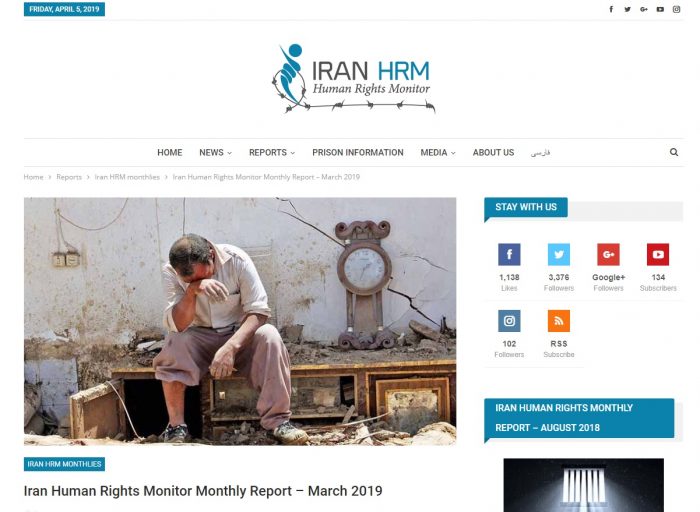 The cover photo for “Iran Human Rights Monitor” report – March edition, covering the horrific flooding and the consequences of the mismanagement of the regime on the people residing in the flood-stricken areas.

Iran Human Rights Monitor released its monthly report for the month of March. The group shone a light on the recent flooding that has affected 28 of Iran’s 31 provinces, reporting that at least 200 Iranian have lost their lives in the disaster.

The group accused the regime’s aid of being “too little and too slow.” Instead of getting aid workers to the regions affected as quickly as possible, the regime dispatched its Revolutionary Guards (IRGC) and Basij forces. They were instructed to prevent any outbreak of protests.

April 4 – Poledokhtar, Lorestan Province, western #Iran
The authorities dispatched IRGC & state police to this flood-hit city where flood emergencies continue.#Iranian officials are more worried about their security than to provide aid & comfort for the people.#IranFloods pic.twitter.com/AvFon8tREl

As Iranians were stranded without food and water, the regime refused to help, instead focusing on its own preservation. “Many social media users observed that residents, often themselves victims of the floods, rushed to help others, while the authorities did very little or nothing,” Iran Human Rights Monitor reported.

I urge my fellow young countrymen to rush to the aid of their flood-hit compatriots especially in #Lorestan and #Khuzestan . #IranFloods

Inspired by messages of solidarity from President-elect of the Iranian opposition, Maryam Rajavi, Iran’s citizens rallied around each other and offered their support for their fellow compatriots. Shop owners, mechanics and other business owners in Shiraz offered their services to the flood victims free of charge.

The clerical regime continues to hid the actual number of casualties and the scale of damages. A large number of victims are stuck in mud in #Lorestan, #Khuzestan and #Ilam, and a lot of people are stranded by #floods. #IranFloods

Iran Human Rights Monitor noted that the regime must bear a share of the responsibility for the scale of the flooding. “Authorities have been over-constructing for a long time and it has destroyed the natural flood barriers that were in place,” it reported.

10 days after lethal #IranFloods in the northern town of Aqqala, flood waters have still engulfed large areas of the town with reports of local officials saying they had to wait for the water to “vaporize”.#40yearsoffail pic.twitter.com/Bsh05ub37U

The regime has destroyed more than 30% of the country’s forests, built villas in agricultural lands, failed to effectively upkeep dams and built on vulnerable river banks and flood plains. This natural mismanagement of Iran’s natural flood defenses exacerbated the disaster and undoubtedly led to the destruction and loss of life this month.

The group also reports that the regime carried out 15 public executions over the course of the month, including a father and son in Birjand Prison charged with the murder of two regime agents.

Nasrin Sotoudeh, a prominent human rights lawyer arrested in 2018, was tried again on a further seven charges. The lawyer is currently in prison serving a five-year sentence for “association and collusion with the intent of sabotaging national security”. She was tried in absentia for a further seven charges. Her lawyer was prevented from attending the trial. She received another 34-year prison sentence and 148 lashes.

Sotoudeh became the target of the regime’s injustices for her peaceful human rights work. She was vocal in her defense of women protesting the regime’s compulsory veil laws and a public critic of the death penalty.

Along with Sotoudeh, labor activist Arsham Rezai received an eight-and-a-half-year prison sentence. He was tried without a lawyer or prior notice. He was accused of “spreading propaganda against the state” and “assembly and collusion against national security.”

Ali Badrkhani, a prisoner of conscience detained in Urmia’s central prison, northwestern #Iran, has been on hunger strike since Tuesday, August 7, 2018. Mr Badrkhani is protesting his transfer to a ward in the prison where 400 narcotics prisoners are held. pic.twitter.com/MVqwEzUt9C

The Persecution of Ethnic Minorities

Iran Human Rights Monitor also reported the rampant arrest of ethnic minority groups in Iran. In March, the Iranian Judiciary sentenced 23 members of the Sufi Dervish to a total of 190 years in prison and numerous lashes. Most of those convicted received sentences of between six and nine years and will serve them in the Greater Tehran Prison.

At least eight Iranian- Arabs from Ahvaz and 24 Kurds were also arrested throughout the month.