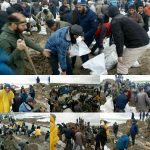 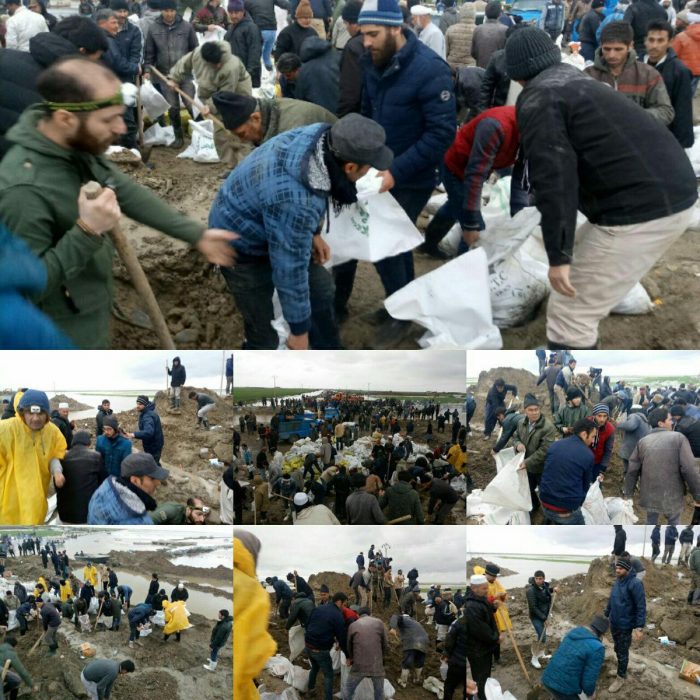 A week after the flash flood covered 30 of 31 provinces of Iran, the corrupt regime has still not done anything to help the victims. It’s only the local people who are rushing to aid others in the region to prevent more damages.

The Friday prayers Leader in Shiraz was cursed by the public during his propaganda visit to the flood-ravaged city this week, according to comments published on the state-run IRNA News Agency on Thursday.

According to the article, which has since been removed from IRNA’s website, Lotfollah Dezhkam met with the Governor of Fars Province to discuss his much-delayed visit to the flood zone. He said, “While visiting flood-stricken areas, we were met with anger from the people.”

Dezhkam that clearly displayed his fear of the public outcry, said: “I was cursed a couple of times while visiting the flood-stricken areas, and I’m distraught,” he said.
The regime cleric admitted the mismanagement and corruption within regime officials that has increased the damage to the people as a result. In a bid to put the blame on other rifts within the regime, he was critical of the choice to pave over a watercourse next to the Quran Gate in Shiraz in the early 2000s. The watercourse provided drainage to the city and prevented flooding for hundreds of years before the municipality decided to build a road over it.

By destruction of the environment, and irregular construction of roads and buildings, the regime’s leaders and the IRGC have ruined the traditional barriers to flash floods, causing devastating flooding of cities and villages. #Iran#IranFlood

“They took the watercourse and built on it. Why should there not be a flood?” Dezhkam asked. Why did the municipality build a boulevard which blocked the watercourse?”

Dezhkam, the mouthpiece of the Supreme Leader,while putting the blame on the other factions said: “We have to see what the municipality has brought on to the people. When the municipality itself violates the boundaries of a dried out river, what do we expect from the people? I saw the violations of the municipality in two or three places myself,” he said.
Dezhkam went so far as to comment on the intelligence of those whose incompetence led to the catastrophic flooding in Shiraz, saying that “imbeciles make the decisions and imbeciles do not live up to their responsibilities.”

According to local and eyewitness reports, more than 150 people perished in Shiraz when flash floods swept through the historic Quran Gate on March 25th.

Regime President Hassan Rouhani visited Golestan Province in northern Iran on Thursday, March 28, with a week delay since the flood hit Golestan Province. Golestan was one of the first areas in Iran to be hit by the floods, and it sustained some of the most severe damage.

A lady shouts at Rouhani in a flood stricken area: We had enough misery! Who is responsible? Everything I had is gone, my money is gone, I have kids!#IranFlood#IranRegimeChange#سپاه_عامل_سیل@CNN, @Foxnews, @EuroParl_en pic.twitter.com/lFGDdqwWqd

Rouhani’s attempts to pretend empathetic to the flood victims largely fell flat, as was evidenced in one video shared on social media, in which a woman angrily approached Rouhani demanded answers. Rouhani smiled and responded, “Don’t worry.”

Flood victims in Golestan and across the country are worried though. Government relief has not arrived, so citizens have mobilized to help each other rebuild.

Mrs. Maryam Rajavi, President-elect of the Iranian Resistance, issued a call for the people of Iran, especially the youth and the MEK Resistance Units, to rush to the aid of those who are suffering after the floods.

#IRANFLOOD March 27- Kermanshah
Almost a year after the 7.3 magnitude earthquake that rocked Kermanshah, the survivors who were still living in trailer, lost their property in a devastating flood. pic.twitter.com/uzuXbjvCnj

The town of Sarpole Zahab, Kermanshah Province, was devastated by an earthquake over a year ago. The residents of this town have been living in harsh conditions in tents and trailers since then and trying to rebuild their lives. The floods washed away these tents and trailers, leaving them with nothing.