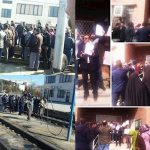 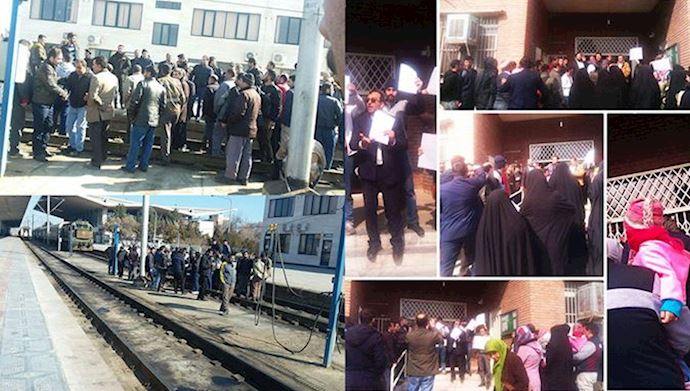 Photo Credit to Mojahedin.org-Protest by various sectors of the society in Iran continues.

Anti-regime protests in Iran continue on a daily basis in response to the country’s failing economy, government corruption, and human rights abuses. These protests have continued for over a year, despite the regime’s repeated attempts to suppress them.

The following is an abbreviated list of some of the protests that have taken place in Iran and reported by MEK sources, over the past week :

On Tuesday, railway workers in Tabriz launched a strike in protest of unpaid wages. Regime officials attempted to intimidate the workers, but despite their threats, the striking employees of the Islamic Republic Railroad Company blocked the railroad tracks and prevented the train from entering the station.

Unpaid wages for railway workers in Iran have been an ongoing issue, leading to several protests over the past year. The Tabriz railway workers went on strike for several days in January to protest unpaid wages but ended their strike after the regime promised to pay their wages in full. Unfortunately, authorities have not made good on these promises, and the railway workers were forced to strike again.

Railroad workers in Hormozgan and Kerman have launched similar strikes over the past week. The workers are all demanding that their overdue wages be paid.

Numerous cities across #Iran reporting protests by people from all walks of life.#IranProtestshttps://t.co/oSeeCkS9E9

While the regime passes blame, the workers who maintain Iran’s railroads are left without the means to feed their families or meet their basic needs. The MEK has reported on numerous strikes over the past year by workers who were forced to protest because their wages were withheld for months. The regime refuses to acknowledge its patterns of denying its people pay for their work.

On Tuesday, students at Tehran University protested against the university’s imposition of arbitrary rules in its housing system. Earlier this week, school regulators canceled the housing of several students at the university. The students were living in the married students’ dormitory. Students were angered by the action and scheduled a number of protests in response.

On Tuesday, taxi drivers in Dorud rallied in front of the governor’s office to protest the arrest of their colleagues. They chanted, “Imprisoned drivers must be freed!”

The taxi drivers were arrested after another demonstration on Saturday in protest of poor working conditions. The regime responded to that protest by raiding the homes of the protesters after the demonstration and arresting four of them.

The drivers refused to be intimidated by the regime’s acts of suppression and gathered again on Tuesday to demand the release of their colleagues and to continue their protests for better working conditions.

The MEK’s Resistance Units work with protesters on the ground and through social media to organize and spread the word of strikes and demonstrations. Dissent can no longer be suppressed, and the people’s voices are being heard. The cries for regime change grow louder each day.