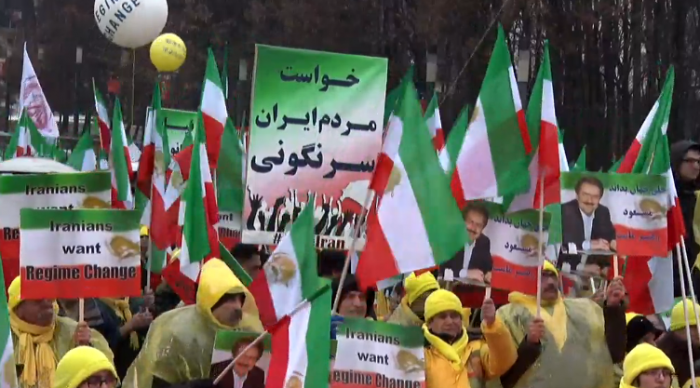 Simultaneous to Warsaw Summit, the MEK supporters held a rally to voice the Iranian people’s quest for regime change in Iran-February 13, 2019

On Wednesday, the MEK supporters held a rally in Warsaw condemning the Iranian regime’s human rights abuses towards its own people and standing in solidarity with the Iranian people by calling for the international community to recognize the people’s right to overthrow the oppressive theocratic regime currently in power.

The rally was planned to coincide with the beginning of the Warsaw Conference, which is taking place February 13-14. The primary focus of the international gathering of political leaders is to discuss Iran’s role in the future of Middle Eastern policy. The Iranian Resistance would like to make it clear that the old policy of appeasement has not been effective in containing the Iranian regime’s threat and the mullahs’ regime is past reform. The NCRI, led by Mrs. Maryam Rajavi, offers a 10-point plan for Iran’s future, including separation of religion and State, gender equality, and a non-nuclear Iran.

A variety of highly-respected dignitaries, politicians, and representatives of the Iranian community gave speeches at the event, and then a large crowd of demonstrators marched on the streets of Warsaw, chanting, “Appeasement, no; regime change, yes!”

The following are some highlights from Wednesday’s speakers:

Rudy Giuliani, Advisor to U.S. President Donald Trump and former New York City Mayor: “Iran is the number one state sponsor of terrorism in the world. We should not be doing business with a regime that supports terror. The Warsaw Summit should be focused on how we change Iran. How do we change their behavior against their people. The last two Free Iran conferences I attended, the regime tried to bomb them; the last one was in Paris.

.@RudyGiuliani: We have seen regime change work & fail. In #Iran's case we don’t have to worry. There is a viable alternative. Maryam Rajavi's 10-point plan stands for a #FreeIran w/ a democratically-elected Gov instead of a tyrant/monarch.#FreeIranWithMaryamRajavi #WarsawSummit pic.twitter.com/EFJHIw2WUV

“The Iranian people have a right to freedom and democracy. They have a right to be free. We will soon achieve the dream of seeing Maryam Rajavi in a free Iran. We have the answer to who will be the alternative to the regime. Maryam Rajavi has laid out a ten-point program which we should support.”

Zbigniew Cichoń, Polish Senator from the PIS party: “Thousands of Iranians are in jail for demanding their rights. Even the lawyers who defend them end up in jail. All Poles are in solidarity with you.”

Marcin Święcicki, Member of the Polish Parliament, former Mayor of Warsaw, and a former Minister for Foreign Economic Relations: “The NCRI movement has a ten-point plan which among other things calls for abolishing the death penalty. We want to see the establishment of peace and democracy in Iran.

Mr Marcin Swiecicki, MP, former mayor of Warsaw: We had to fight for a long time for Poland to enjoy independence, democracy and human rights, where as in #Iran the fight is still ongoing.#FreeIranWithMaryamRajavi#IStandWithMaryamRajavi#WarsawSummit @USADarFarsi @SecPompeo pic.twitter.com/uEEzqLfy7Q

Ryszard Majer, Polish Senator and Vice President of the Foreign Affairs Committee from the PIS party: “We respect freedom and solidarity. Are those values important to you? Yes, every nation needs freedom and solidarity, freedom to decide for themselves. Also in Iran freedom for Iranian people is necessary for the entire world.

Mr Ryszard Majer: Freedom, solidarity and respect are important for all of us. I have met people who believe respect for life, freedom & solidarity are not merely empty words. #FreeIranWithMaryamRajavi#IStandWithMaryamRajavi#WarsawSummit#FreeIran@USADarFarsi @SecPompeo pic.twitter.com/QpMin1ooyD

“As a Pole, I understand this. For many years there was no freedom of assembly, no freedom of speech, for all of those who wished for change. Today I admire all of the efforts of Maryam Rajavi who works for solidarity and well-being in Iran.”

13:00: Robert Torricelli, former United States Senator (D): “We have tried to negotiate with Tehran. There have been negotiations with Tehran for 40 years. But they answered with terrorism. The lives of the thousands of martyrs laying in their graves are a testimony that this regime it not negotiable.”

.@bobtorricelli: Thousands of Iranians who at the risk of their lives have taken to the streets of #Iran, they are your choice, thousands of ppl of the diaspora across Europe and America, they are a choice, the NCRI is a choice, Mrs. Rajavi is a choice. #FreeIranWithMaryamRajavi pic.twitter.com/7xICR8DSMH

“A government that murders its opponents, cannot be trusted to respect the nuclear agreement. a murderous regime cannot be a trustable regime.”

“Those nations who believe we have no other choice than to accommodate Iran, we say to them: We are the choice! The democratic alternative. The thousands and thousands of Iranians who have risked their lives in the streets of Iran, they are the choice. The NCRI is the choice, Mrs. Maryam Rajavi is the choice.”

13:05: Zbigniew Cichoń, member of the Polish Senate from the PIS party: “As a nation, you have a right to fight. This is a dream that will soon become true. It will become true because our dream in Poland became true.”

Zbigniew Chichon:
The regime has executed so many people that questions its legitimity
I hope your dream of freedom will come true soon. Long live free and happy Iranians.#FreeIranWithMaryamRajavi#PolandSummit#IStandWithMaryamRajavi#WarsawSummit#FreeIran@USADarFarsi pic.twitter.com/CewURHwP0Q

“I believe very soon Iran will become a free state, a state of rule of law, not the rule of a few individuals against the people.”

13:10: Sid Ahmed Ghozali, former Prime Minister of Algeria: “The MEK is the only force capable of freeing Iran. If we love peace and stability in this region, we need to eliminate the threat of Iran’s regime. And in order to do that, the only option is to support the Iranian Resistance led by Maryam Rajavi. I hope and pray to God that next year we can hold this meeting in Tehran.”

Sid Ahmed Ghozali – Former Prime Minister of Algeria
It is a privilege for me to be here with you my Iranian friends who are in the resistance & who have sacrificed 10s of thousands in the path 4 freedom.#FreeIranWithMaryamRajavi#WarsawSummit#FreeIranRally @USADarFarsi pic.twitter.com/kMBMleiU9y

Javad Dabiran, member of the Foreign Affairs Committee of the National Council of Resistance of Iran (NCRI): “Forty years after the downfall of the Shah’s dictatorship, it is time for the overthrow of the mullahs. This regime has brought nothing but misery and corruption and death and killings. So, it is time they go. They have only faced one strong opposition, that of the MEK (PMOI).”

@JavadDabiran: 40 years ago, Iranian people’s uprising resulted in fall of Shah’s regime. At that time people wanted freedom and democracy. Today, these are still the aspirations of the people#FreeIranWithMaryamRajavi#PolandSummit#IStandWithMaryamRajavi#FreeIran@USADarFarsi pic.twitter.com/T4UWFBckPW

Malieh Malek Mohammadi, a representative of the Iranian communities in Europe: “It’s the era of uprisings and of the overthrow of the mullahs. This opposition, the MEK, has more than forty years of experience. Time has come for payback for the dictators in Iran. Democracy and freedom will come to Iran.”

Matin Doustmohammadi, a representative of the Iranian youth associations in Europe: “We had 40 years of repression. But I am proud that in these 40 years, the MEK and their supporters continued their Resistance. I salute the MEK’s “Resistance Units” inside Iran that are leading all the protests.
“The regime is not paying any price for its crimes. If the Western government want to respect their own laws, they should arrest the regime’s agents and put the IRGC on the blacklist and expel the diplomat-terrorists of this regime.”

Homayoun Sim-Laqaee, a representative of the Iranian communities in Europe: “The fake ‘alternatives’ to the regime that have been formed by the Iranian intelligence ministry only aim to discredit the MEK, but they will not lead anywhere.

“The time has come for the downfall of the mullahs with the leadership of Mr. Massoud Rajavi, the leader of the Iranian Resistance.”